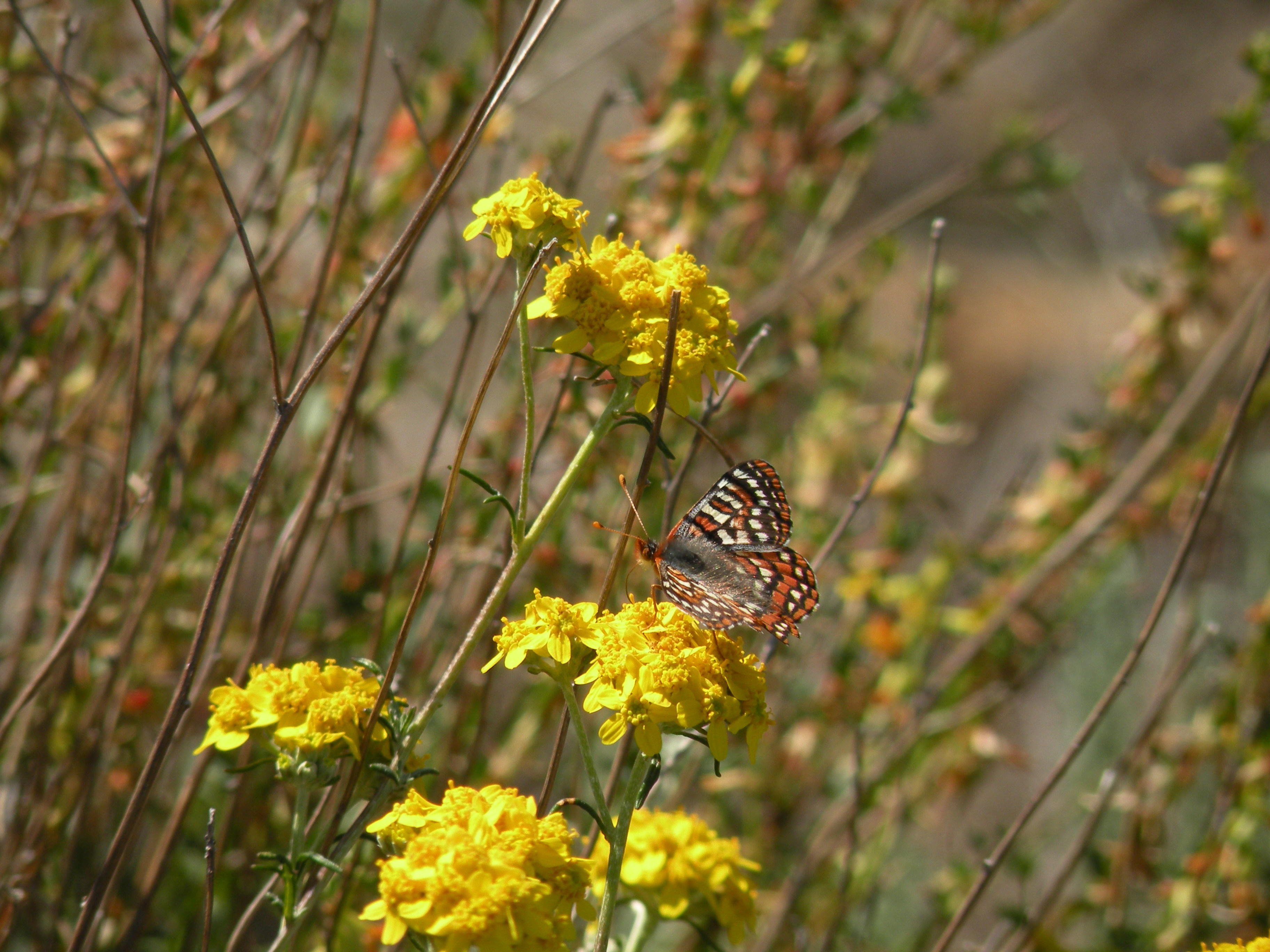 In 2017-2018, develop habitat suitability models for Quino checkerspot, host plants, and nectaring plants under current and future climate change scenarios, and conduct fire risk modeling with different management scenarios to identify potential climate and fire refugia. The results of this modeling will be used to inform development of monitoring and management plans.

Beginning in 2017, prepare a long-term Quino checkerspot metapopulation monitoring plan to track population distribution, abundance, and phenology, and to assess habitats and threats at checkerspot occurrences (see occurrence table), historically occupied and unoccupied high suitability sites across Conserved Lands in the MSPA. The monitoring plan should build upon previous surveys, habitat assessments and modeling to include specific monitoring questions, the sampling frame within the MSPA, monitoring methods, a statistically valid sampling design, sampling locations, timeline, and standardized protocols for determining the status and abundance of larval and adult butterflies and for assessing habitat and threats at each sampling site to determine management needs. The plan should stipulate that for each survey year, a report be prepared with site-specific management recommendations. The monitoring plan will be piloted with field surveys in 2018 to determine if adjustments need to be made and will be finalized in 2019 and then added to the final management plan in 2021 to create a comprehensive Quino Checkerspot Management and Monitoring Plan.

In 2017-2018, develop a section for Quino checkerpot nectaring forbs and host plants in the MSP Seed Collection, Banking and Bulking Plan to enhance and restore habitat for the butterfly. The plan should incorporate best science and management practices (e.g., Wall 2009; KEW 2016) to provide guidelines for collecting and providing a source of seeds for management purposes. The plan should include recommendations for: collecting and storing seeds to provide source material with consideration of potential genetic consequences; for management oriented research; seed bulking; and out-planting to augment extant occurrences or establish new occurrences of Quino checkerspot.

In 2017, begin developing an interim 5 year Quino Checkerspot Management Plan that focuses on habitat enhancement and restoration and fire management, and includes the information from the MSP Seed Collection, Banking and Bulking Plan for Quino checkerspot, at known occupied and historically occupied sites. In 2021, update and finalize the management plan with results from the captive rearing and translocation projects and combine with the monitoring plan to create a comprehensive Quino Checkerspot Management and Monitoring Plan.

From 2018 to 2021, monitor the effectiveness of management actions implemented for Quino checkerspot on Conserved Lands

From 2017 to 2021, support existing efforts by the wildlife agencies to collect eggs and captive rear larvae to use in reestablishing and augmenting wild Quino checkerspot populations. Use results to finalize the Quino Checkerspot Management and Monitoring Plan.

From 2017 to 2021, support existing efforts by the wildlife agenices to translocate captive bred Quino checkerspot larvae to historically occupied habitat.

From 2017 to 2021, support efforts by the wildlife agencies to monitor the effectivenss of translocated captive bred Quinoo checkerspot larvae. Use results to finalize the Quino Checkerspot Management and Monitoring Plan.

From 2017 to 2021, implement invasive plant control and other post-fire management actions as needed to ensure the recovery of Quino checkerspot at sites occupied within the last 10 years to facilitate habitat recovery, particularly forbs and host plants after wildfire events.

From 2017 to 2021, for at least the first 3 years following a wildfire, monitor recovery of Quino checkerspot occurrences and habitat affected by fire. Use a standardized postfire protocol to document the butterfly's distribution and abundance over time and to characterize habitat recovery and threats following a wildfire. Postfire monitoring should encompass occupied Quino checkerspot sites and unoccupied sites that are important for enhancing connectivity or for future population expansion. The postfire monitoring should identify and prioritize management actions to assist in recovery of Quino checkerspot populations and important habitat patches.

Once considered the most widespread and abundant butterfly in southern California [1]. Has declined precipitously since the 1920s and is currently persisting only from several areas in southwestern Riverside County, southern San Diego County, and north-central Baja California [1;2]. In coastal San Diego county, the distribution of the QCB is determined by its primary larval hosts plant, dot-seed plantain [3].

Habitat preference for "scrublands," described as patchy scrub or small tree landscapes with openings of several meters between large plants or a landscape of open swales alternating with dense patches of shrubs [1]. Have been observed at the bases of hills sunning themselves and flying through disturbed areas to sites possessing larval food plants and/or nectar sources [4]. Appear to be associated with open spaces within several community types from scrub on coastal bluffs, through coastal sage scrub, chaparral, oak woodland, to desert pinyon-juniper woodland [1].

One of more than 20 subspecies of Euphydryas editha [5]. The most southwesterly subspecies [1]. Parapatric with three other subspecies: E. e. editha, E. e. augustina, and E. e. ehrlichii [6], where they are differentiated by temporal or elevational segregation or by larval food plant differences [1]. Genetic analysis and research supports the integrity of the subspecies as a coherent genetic entity within the species. It indicates populations that are geographically closest to each other are also genetically closest to each other [7]. More closely related to E. editha than the other three subspecies [1;8].

Adult single flight season typically occurs from late February into April, with variability dependent on climactic conditions [1;9; both cited from 2]. Early in the season, larvae and adults most likely detected on warm south-facing slopes and, as the flight season progresses, detections mostl likely seen on cool north-facing slopes [4].

Females mate once and lay approximately 20–180 eggs in a single egg mass; Eggs hatch in 7–10 days [1;2;10]. Larvae begin feeding on the host plant immediately and enter diapause (which corresponds with food plant senescence) after two or three molts [2]. Diapause terminates with late fall or winter rains, where larvae begin feeding and eventually enter the pupal stage (or re-enter diapause) [10]. Adults balance their time between searching for mates, feeding on nectar, defending territories, and searching for host plants on which to oviposit [11]. Will only deposit eggs on species they recognize as host plants: Plantago erecta, Plantago patagonica, Anterrhinum coulterianum, and Collinsia concolor [12].

Dispersal behavior and capabilites remain unknown [2]. Long-distance dispersal in this species is rare. Populations considered demographically isolated when separated by more than 2 miles [1].