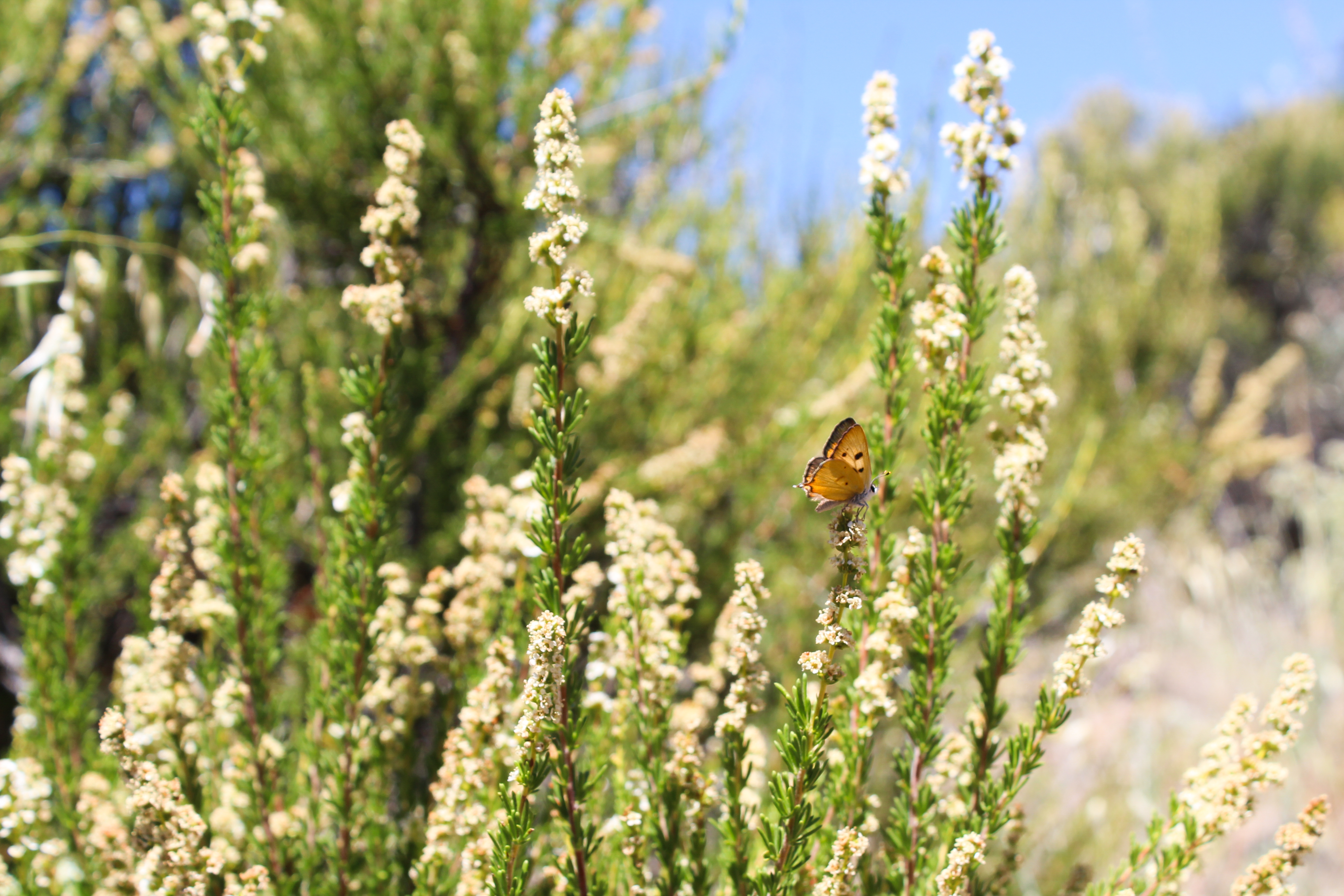 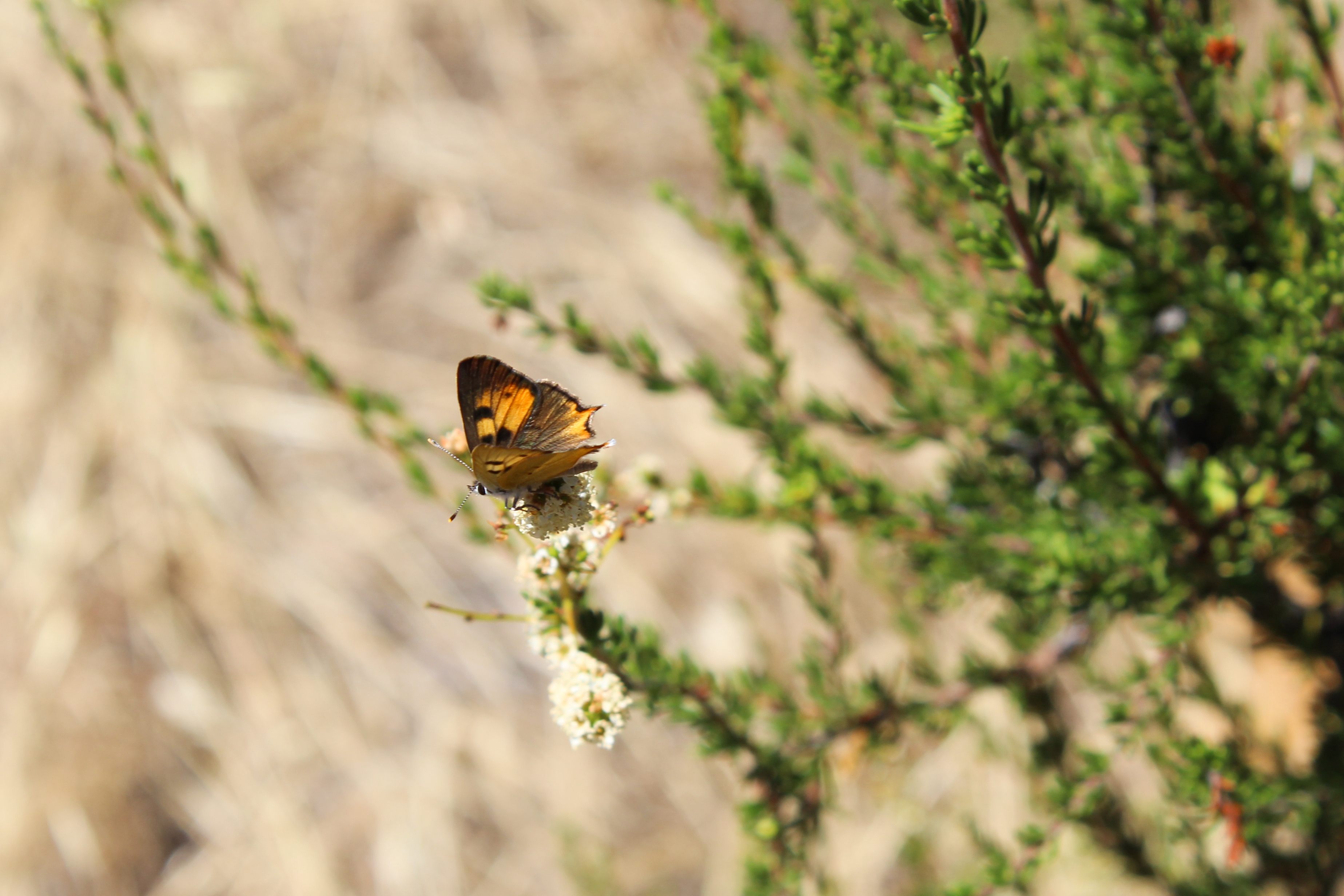 In 2017-2019, continue surveys for adult Hermes copper (see occurrence table) and habitat assessments begun in 2016 to document the butterfly's current distribution and abundance and to assess habitat and threats at survey sites. Prepare site-specific management recommendations based on survey results and habitat assessments.

From 2017 to 2019, continue Hermes Copper translocation experiments begun in 2014 to test the effectiveness of releasing eggs and larvae to repopulate the Hollenbeck Canyon Wildlife Area (see Table of Occurrences) where the original population was extirpated by fire.

From 2017 to 2021, continue monitoring the effectiveness of Hermes Copper translocation experiments begun in 2014 at Hollenbeck Canyon Wildlife Area (see Table of Occurrences). Extend the monitoring for 2 years after the last egg is translocated to determine whether a population has been established.

In 2017, continue development of BMPs begun in 2013 for captive rearing Hermes Copper at the San Diego Zoo. Attempt to determine optimal conditions for rearing Hermes copper in captivity to provide a source of butterflies for translocations to re-establish populations at sites where the butterfly has been extirpated or to establish new populations in suitable habitat.

In 2017, develop habitat suitability models for Hermes copper and the host plant (spiny redberry), and the primary nectaring plant (California buckwheat) under current and future climate change scenarios, and conduct fire risk modeling with different management scenarios to identify potential climate and fire refugia. The results of this modeling will be used to inform development of monitoring and management plans for this butterfly.

In 2017, complete a 5 year Hermes Copper Management Plan that includes the results from butterfly surveys and habitat assessments and genetic, marking and translocation studies to develop a management strategy and to identify and prioritize site specific management actions. The plan should employ the modeling results to identify potential fire and climate refugia that may be suitable sites for future translocations and provide specific recommendations for reducing fire risk at occurrences at highest risk.

In 2018, develop a monitoring plan to track long term distribution, abundance, and phenology, and to assess habitats and threats at Hermes copper occurrences (see Table of Occurrences), historically occupied and unoccupied high suitability sites across Conserved Lands in the MSPA. The monitoring plan should build upon previous surveys, habitat assessments and modeling to develop specific questions, monitoring methods, a statistically valid sampling design, sampling locations, and standardized protocols for determining the status and abundance of the butterfly and for assessing habitat and threats at each sampling site to determine management needs. The plan should stipulate that for each survey year, a report be prepared with site-specific management recommendations.

For at least the first 3 years following a wildfire, use a standardized survey protocol to determine the status of Hermes copper occurrences impacted by fire. Use a standardized postfire protocol to collect vegetation and other covariates important in characterizing Hermes copper habitat recovery following a fire. Postfire monitoring should include collecting habitat recovery data at unoccupied sites that are important for enhancing connectivity or for future population expansion. Identify and prioritize management actions to recover Hermes copper populations and important habitat patches.

For at least the first 3 years following a fire, implement management actions identified by postfire monitoring as necessary to protect and rehabilitate high quality habitat to allow for recovery of Hermes copper occurrences impacted by wildfire.

Overall Confidence
Current Status
The current overall condition status of the Hermes Copper Species Indicator is Significant Concern based on consideration of the two metrics selected. In 2020, Hermes copper populations had disappeared from all but three sites occupied in 2010 (Metric 1) and the remaining populations dwindled to small numbers (Metric 2). Additional metrics will be developed in the future as more information becomes available.
Metrics Dashboard
Full metric information for this species is available on our Dashboard.
Metrics Dashboard

Endemic to small region in southern California and northern Baja California, Mexico [1]. A few known populations exist in and around suburban areas in San Diego. Of 54 U.S. locations dating back as far as the early 1900’s, 17 were considered extant, 8 were of unknown status, and the remainder were considered extirpated [2]. Thorne (1963) described the range as extending 50 miles north of the Mexican border almost to Fallbrook and south of the border almost one hundred miles (to a point 18 miles south of Santo Tomas, Baja). In San Diego County, Thorne (1963) reported as ranging inland to Pine Valley, about forty miles from the Pacific Ocean [3].

A federal Candidate for Listing

Most taxonomists consider Hermes to be a member of the Holarctic genus Lycaena;although prior designations have also included the genera Tharsalea and Hermelycaena [5,6]. Allozyme evidence suggested that L. hermes could belong to a separate genus or subgenus [7]. Population genetic analysis found support for the presence of multiple populations within San Diego County, with evidence of some distance dispersal and subsequent recruitment into breeding populations [8] .

Univoltine (produces one brood per season); found as adults mid-May to mid-July; flight season ~ 30 days (references in [1]). Adults typically rested on buckwheat inflorescences (open or closed) or spiny redberry leaves with daily activity strongly influenced by ambient temperature. Activity was typically low early in the morning and increased as temperatures rose into the 20s (degrees Celsius); there also appeared to be an upper temperature threshold for activity.

Reported as typically undertaking short movements, majority of which tend to be well below 50 meters and rarely exceed 100 meters (references in [8]). However, genetic analysis suggests that long-distance movements occur, with landscape features likely enhancing or restricting dispersal.

Habitat loss and habitat fragmentation from urbanization, with much of previously occupied area now urbanized [5]. Despite loss of this species’ habitat to development, “restrictions are in place to limit development and the corresponding destruction and modification of Hermes copper butterfly habitat in the future.” [2]. USFWS [2] identified “the combined impacts of existing development, limited future small-scale development, existing dispersal barriers, and megafires could further fragment Hermes copper butterfly habitat and threaten the species.” Wildfires in 2003 and 2007 led to the extirpation of many populations [9].

[6] Miller, L.D. and F.M. Brown. 1979. Studies in the Lycaeninae (Lycaenidae) the higher classification of theAmerican coppers. Bulletin of the Allyn Museum, 51:130. Available for download at: http://www.flmnh.ufl.edu/mcguire/publications/allyn-bulletin/