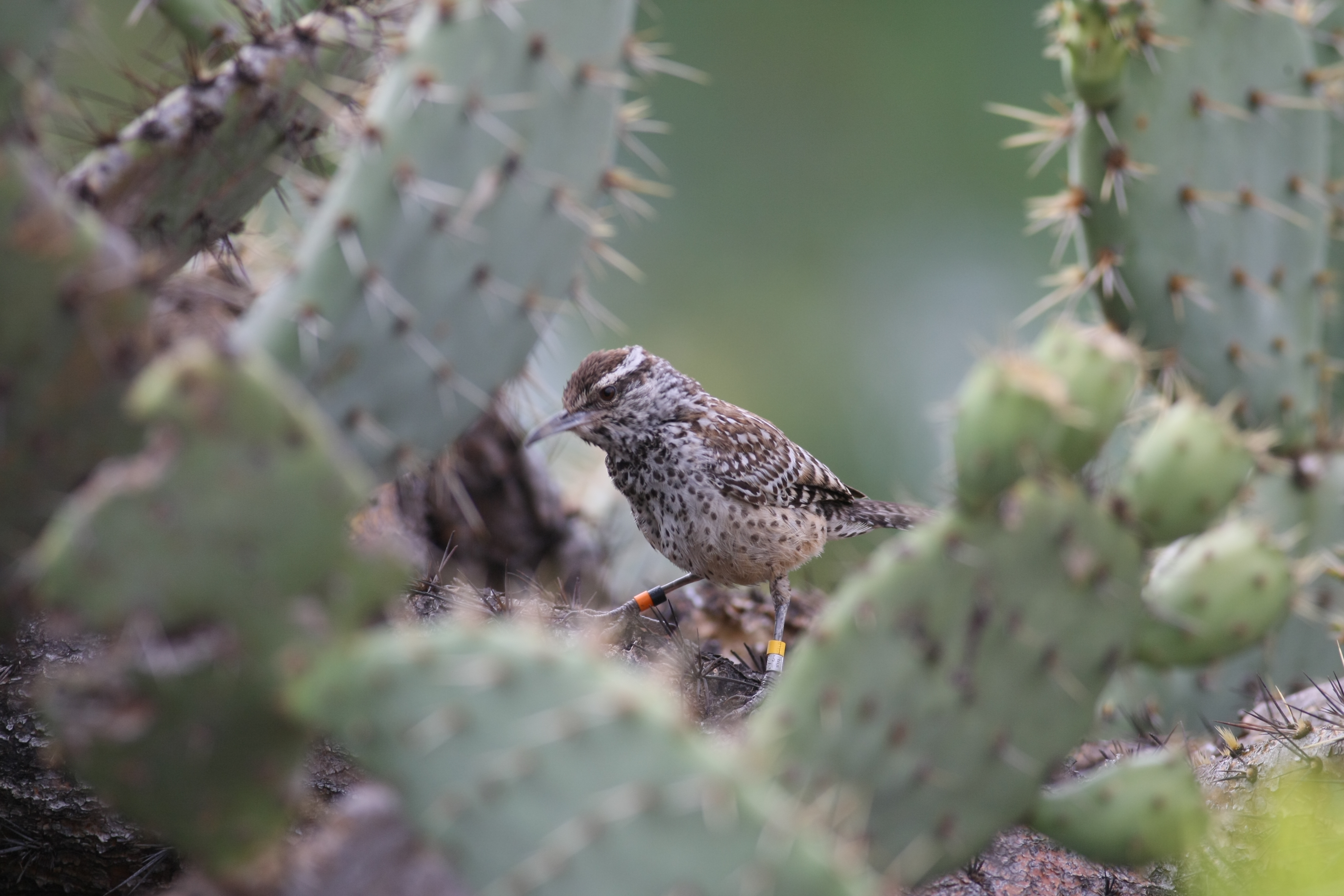 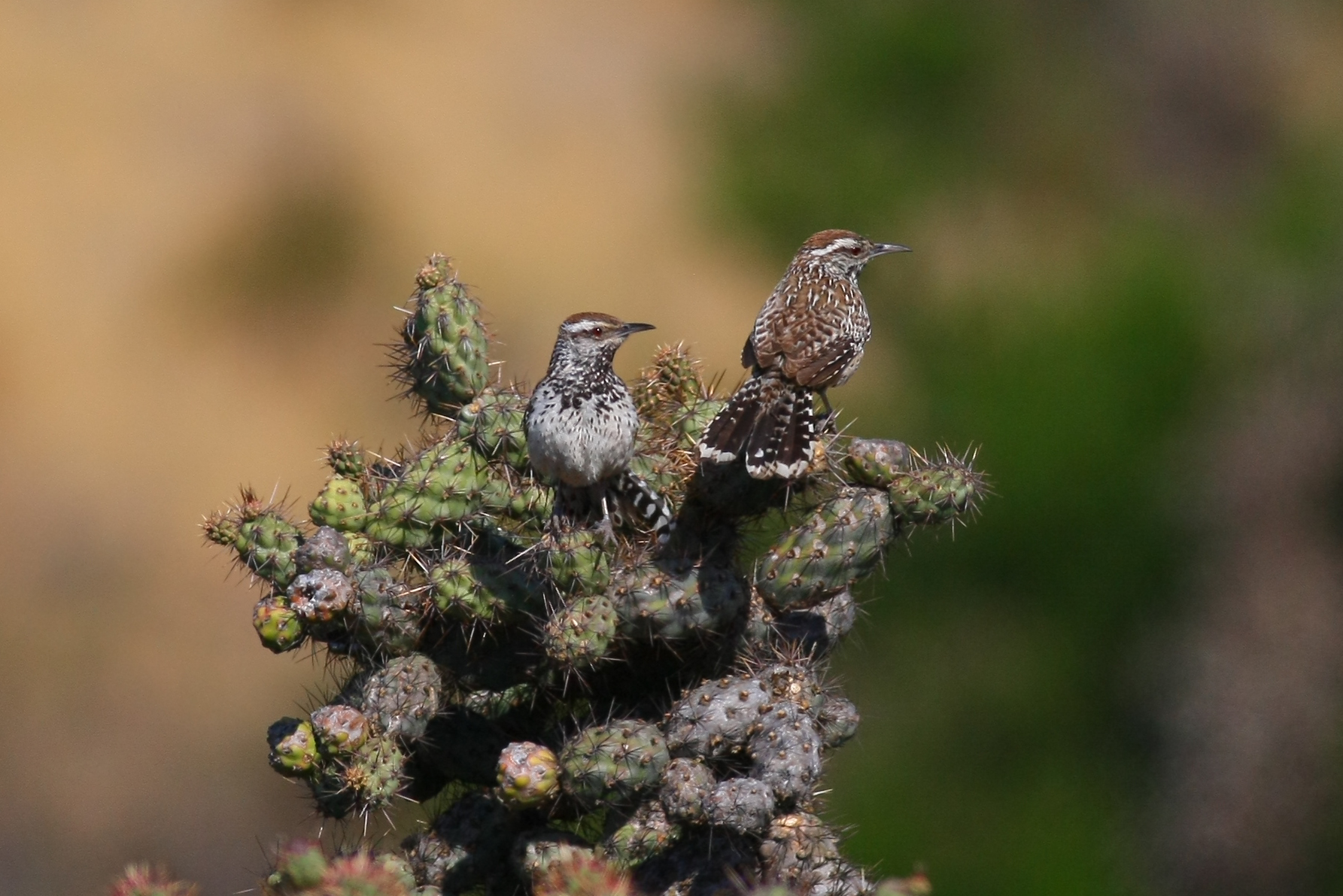 From 2017 to 2021, use a standardized protocol to survey for cactus wrens to determine territory, pairing and banding status and collect habitat covariate data in cactus scrub habitats on Conserved Lands in the Otay and San Diego/El Cajon genetic clusters (see occurrence table). In 2018 and 2021, expand surveys to include the San Pasqual Valley/Lake Hodges genetic cluster.

From 2017 to 2019, continue the Coastal Cactus Wren Demography, Vegetation and Arthropod Study begun in 2015 to investigate relationships between habitat quality and wren reproduction, dispersal and survival in the Otay and San Diego/El Cajon genetic clusters (see occurrence table). Habitat quality is measured at the territory scale and characterized by vegetation attributes, arthropod community composition, nestling diet, and potential availability of arthropod prey based on plant associations. Use the results to develop specific restoration recommendations to enhance habitat suitability and food resources important to cactus wren reproduction and survival.

From 2017-2019, in conjunction with standardized surveys and with banding activities for the Coastal Cactus Wren Demography, Vegetation and Arthropod Study, collect feather or blood samples from nestling and adult cactus wren at sites where wrens were sampled in 2011-2012 for the Southern California Cactus Wren Genetics Study (Barr et al. 2013, 2015). Determine if genetic diversity and effective population size have changed in the Otay, San Diego/El Cajon, and San Pasqual genetic clusters (see occurrence table) and evaluate whether there are potential threats to long-term population sustainability from inbreeding. Based on these results, prepare specific recommendations for managing gene flow and/or population expansion to enhance genetic diversity and effective population size.

In 2017-2021, continue supporting restoration of cactus scrub based upon ICR's Restoration Analyses for the San Pasqual Valley/Lake Hodges coastal cactus wren genetic cluster (see occurrence table) to: rehabilitate cactus scrub destroyed or degraded by the 2007 Witch Fire; to expand occurrences, particularly adjacent to Lake Hodges; to improve connectivity within the genetic cluster; and as needed, to manage high risk of anthropogenic predation of adults and nestlings.

From 2017-2021, collect data on the effectiveness of implementing high priority management actions to restore cactus scrub to expand coastal cactus wren populations and enhance connectivity within the San Pasqual Valley/Lake Hodges genetic cluster (see occurrence table). In 2021, compile data from all restoration projects and determine the effectiveness of cumulative management actions for north San Diego County. Use these results to develop a management strategy that will provide the basis for preparing a North County Coastal Cactus Wren Habitat Conservation and Management Plan in 2022.

Implement prefire management to reduce potential severity and impacts from future fire at prioritized cactus wren occurrences and habitats most at risk from wildfire.

For at least the first 3 years following a wildfire, use a standardized survey protocol to determine the status of coastal cactus wren occurrences affected by the wildfire. Use a standardized postfire protocol to collect vegetation and other covariates important in characterizing postfire cactus scrub habitat recovery. Collect habitat recovery data at unoccupied cactus scrub sites that are important for enhancing connectivity or for future population expansion. Identify and prioritize management actions to recover wren populations and important cactus scrub habitat patches.

For at least the first 3 years following a wildfire, implement management actions identified by postfire monitoring as necessary to protect and rehabilitate high quality cactus scrub to allow for recovery of coastal cactus wren occurrences affected by the wildfire.

Overall Confidence
Current Status
The current overall condition status of the Coastal Cactus Wren Species Indicator is Concern based on an assessment of the two metric conditions. While occupied plots (Metric 1) currently fall within the Caution category, there is concern that cactus wrens occur only in a fraction of their former range. They are not monitored in areas where they have been extirpated (for example, cactus patches along the coast). Coastal cactus wrens are sparsely distributed in available habitat in small populations vulnerable to local extinction from stochastic processes and stressors such as drought (Metric 1). Habitat quality (Metric 2) fell in the Concern category. Additional metrics will be added as more information becomes available.
Metrics Dashboard
Full metric information for this species is available on our Dashboard.
Metrics Dashboard

Closely associated with three species of cacti and occurs almost exclusively in thickets of cholla (Opuntia prolifera) and prickly pear (Opuntia littoralis and Opuntia oricola) dominated stands of coastal sage scrub below 457 meters in elevation on mesas and lower slopes of the coast ranges [2].

Exhibits year-long, diurnal activity. The species is not migratory [5].

Breeds from March into June; clutch size is 4-5 eggs, with a range of 3-7 eggs [6]. Two broods per season are common; incubation is 15-18 days, by the female only [7]. The altricial nestlings fledge at 17-23 days, with an average of 21 [8]. The young may return to roost in the nest after fledging. The young become independent at about 1 mo after leaving the nest; sometimes the young help feed the young of later broods [6]. Overall adult survival rate reported as 50.6% during a six year study [7].

Forages on the ground and in low vegetation for insects and other small invertebrates, cactus fruits and other fruits, seeds and nectar [7, 9]. Fruits make up 15-20 percent of the annual diet [10].

Generally considered to have low dispersal; in Arizona, of 55 nestlings banded, 41 dispersed from the natal site by 45 days postfledging; males remain near the natal site, usually dispersing only as far as parental territorial behavior dictated [2].

The most important threat to coastal cactus wren has been the loss and fragmentation of cactus scrub habitat as a result of urban and agricultural development [2]. A second primary threat is large wildfires that cause direct mortality of birds and destroy cactus scrub, which can take many years to recover [11, 12, 13, 14].Other threats include invasive plant species reducing open habitat for foraging, [15, 16] declines in productivity during drought, and predation by domestic cats, roadrunners, snakes, loggerhead shrikes, and especially Cooper's hawks.