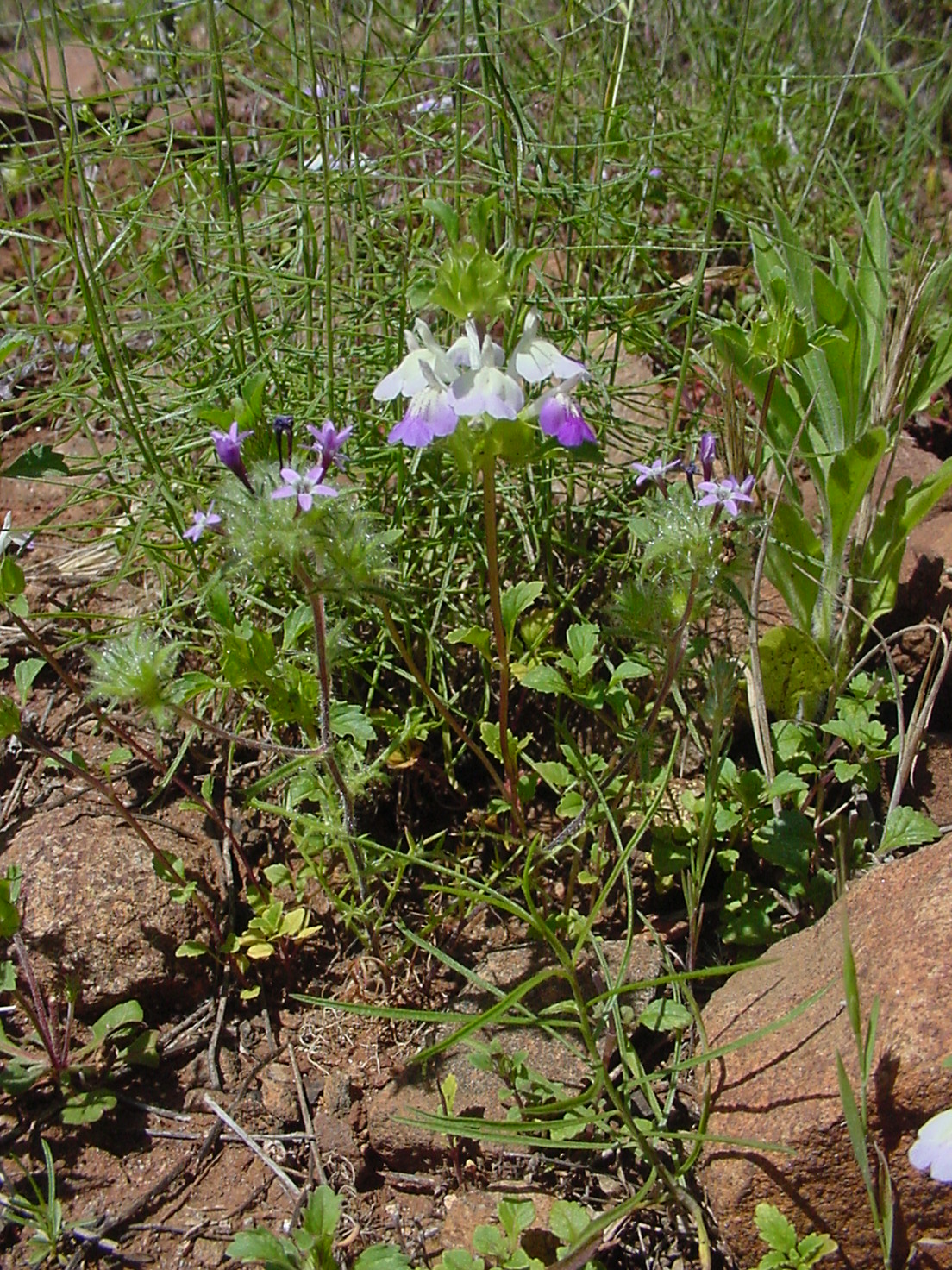 Beginning in 2017, conduct routine management actions identified through the IMG monitoring at San Diego thornmint occurrences on Conserved Lands (see occurrence table). Depending on the type and level of threat, management should only be conducted as needed, not necessarily every year, and using BMPs with precautions to do no harm.

In 2017, continue a study begun in 2016 to characterize the population genetic structure, gene flow, and genetic diversity for San Diego thornmint occurrences (see occurrence table). The study will determine if there is evidence of mixed ploidy levels within or among occurrences; evaluate vulnerability of occurrences to genetic drift and loss of genetic diversity; assess the level of gene flow among occurrences; identify if there are signatures of genetic bottlenecks or low genetic diversity in occurrences that have undergone recent reductions; and look for evidence of local population adaptation. Based on the results of the genetic analyses, management recommendations will include whether common garden and reciprocal transplantations are necessary before proceeding with population enhancement or restoration and will provide specific recommendations for collecting, bulking and distributing seed to enhance existing occurrences or establish new occurrences.

In 2018, begin preparing a section for San Diego thornmint the MSP Rare Plant Management Plan that prioritizes management actions to maintain or expand occurrences on Conserved Lands based upon an assessment of data on occurrence status, habitat and threats. Prioritize management recommendations to maintain large occurrences and enhance at least 3 small occurrences (see occurrence table). Minimum criteria for enhancement are to reduce invasive annual nonnative plants and thatch to less than 20% absolute cover within the occurrence

In 2019, begin monitoring the effectiveness of implementation of the highest priority management actions identified in the San Diego thornmint section of the MSP Rare Plant Management Plan.

In 2018, begin preparing a section for San Diego thornmint in the MSP Seed Collection, Banking and Bulking Plan to preserve genetic diversity and rescue occurrences in case of catastrophic disturbance. The plan should incorporate best science and management practices (Wall 2009, KEW 2016) and recommendations from the 2016-2017 genetic study to provide guidelines for collecting and storing seeds over the long term at a permanent, established conservation seed bank (e.g., Institute for Conservation Research Native Plant Seed Bank, Rancho Santa Ana Botanic Garden Seed Conservation Program) and for providing sources of seeds for management purposes. The plan should include recommendations for: collecting and storing seeds for conservation banking; management oriented research; rescuing occurrences after catastrophic disturbances; and seed bulking and out-planting to augment extant occurrences or to establish new occurrences with consideration of genetic implications for population sustainability.

In 2019, begin implementing the MSP Seed Collection, Banking and Bulking Plan for San Diego thornmint to collect and store seeds at a permanent seed bank and to provide propagules as needed for management oriented research, existing population enhancement and establishment of new occurrences.

In 2017, continue field research into soils and habitat relationships and development of habitat suitability and climate change models for San Diego thornmint and other edaphic endemic plants to better understand habitat requirements and to identify and prioritize geographic areas important for connectivity, restoration, and range shifts due to climate change and other threats.

Overall Confidence
Current Status
The current overall condition status for the San Diego Thornmint Species Indicator is Caution, with an Improving trend, based on the consideration of all three metrics. While Metric 2 (occurrence status) and Metric 3 (threats to occurrences) have not changed over time, there has been a large increase in the number of conserved occurrences (Metric 1). For Metric 2, occurrence status (size) has recently increased in response to management and favorable environmental conditions in 2019 and 2020 after intensive drought in 2014 and 2015. This indicates that the condition of thornmint could improve over time with management and favorable weather conditions. Determination of whether there is an overall long-term improving trend in occurrence status (Metric 2) requires more years of monitoring and is currently assessed as No Change. Threats remain relatively high at conserved San Diego thornmint occurrences (Metric 3). The condition of thornmint can improve over time with management and supports an overall improving trend, although more years of data are required to evaluate this potential trend into the future. Additional metrics related to management may be developed in the future.
Metrics Dashboard
Full metric information for this species is available on our Dashboard.
Metrics Dashboard

Occurs in openings within coastal sage scrub, chaparral, and native grassland [3; cited in 1, 4]. Restricted to gabbro soils derived from igneous rock, and gray calcareous clay soils derived from soft calcareous sandstone [5; cited from 1]. Occurs on gentle (0-25 degrees) southeast to west facing slopes [1]. Elevation range is 10-960 meters [2]. Characterized by a low density of forbs and geophytes, and a low density or absence of shrubs [1].

Inbreeding was identified as a problem for small populations, which can have significantly lower germination rates due to high levels of homozygosity [6]. Has significant genetic structure [9]. Differentiation among populations is consistent with gene flow decreasing as a function of geographic distance. Longitudinal and elevational distance more strongly related to genetic differentiation than latitudinal distance. Potential polyploidy, but further confirmation needed.

Winter annual that germinates in late winter to early spring and flowers in April and May [1]. Seeds mature in late spring and early summer.

Breeding and mating systems are unknown but a study of other congeneric species indicates some level of self‐compatibility and autogamous seed production [7; cited from 1]. The most common insect visitors for other congeneric species are medium‐ and large‐sized bees, particularly bumble bees. Excessive ground thatch may interfere with insect visitation and also nesting of potential pollinators such as ground‐nesting bees [8, 9]. Species has a short-lived, above-ground seed bank, with very little seed stored in the soil [10].

USFWS 2009 5-Year Review determined urbanization as the most significant threat [1]. Proximity of development to occurrences leads to nonnative plant competition, trampling, fragmentation, and increased isolation. In 2009, 62 percent of occurrences were adjacent to development, cutslopes, agricultural fields, golf courses, ornamental landscaping, and fuel modification zones. Road construction, vehicles, grazing, foot traffic, recreational activities, and erosion are also threats [2]. Recreation occurring at over 40 percent of the extant occurrences is a potential threat because trail use on wet clay lens soils can cause deep ruts [1]. Particularly sensitive to competition from nonnative plants, such as purple false-brome, that alter habitat [9]. Fire can negatively impact habitat due to invasions by nonnative fire following plants [1].Climate change may affect longterm viability of current habitat due to: (1) drier conditions that may result in a lower percent germination and smaller population sizes; (2) higher temperatures may inhibit germination [10]; (3) a shift in the timing of the annual rainfall may favor nonnative species [1]; (4) the timing of pollinator life-cycles may become out-of-sync with timing of flowering; and (5) drier conditions may result in increased fire frequency, making the habitat more vulnerable to the threats of subsequent erosion and nonnative/native plant invasion.

Under a Local Assistance Grant from the California Department of Fish and Wildlife, the Conservation Biology Institute, in partnership with the San Diego Management and Monitoring Program, conducted a comprehensive review of existing information, past research, and current management and monitoring for San Diego thornmint and developed an Adaptive Management Framework for future research and monitoring [11]. Limitations to accurately assessing population status are: (1) lack of recent census data, (2) a comprehensive threats assessment, and (3) accurate mapping. These limitations are being addressed through the MSP Inspect and Manage objective with regionally coordinated monitoring efforts using a standardized protocol to assess population status, habitat, and threats [12]. In September 2014 the Center for Natural Lands Management completed an Environmental Mitigation Program Grant "Species-specific Management: Genetic studies of San Diego thornmint (Acanthomintha ilicifolia) to inform restoration practices" [9]. Recommendations for protecting the genetic integrity and diversity are: (1) Support natural regeneration of large populations, (2) Use management to rapidly increase the population size of any recently small populations, (3) Use collections of historically small populations to enhance population size, (4) Record and maintain records of any movement of plant material, (5) Design seed collections to maximize genetic diversity within population, (6) Keep seed collections separate at least by site if collection within large population.