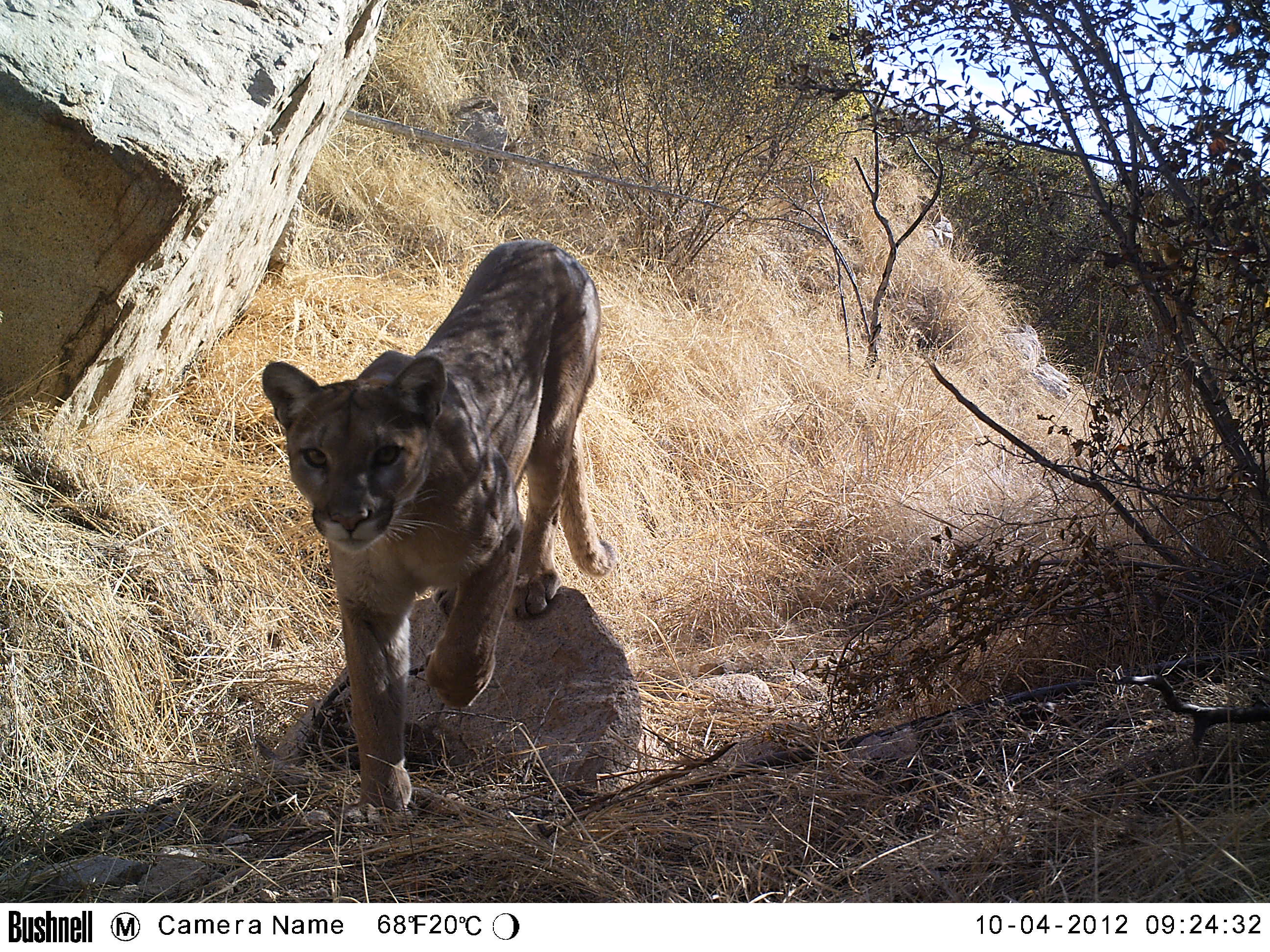 Goal: Enhance and expand areas occupied by mountain lion in San Diego County in large interconnected blocks (>1,000 acres) of suitable natural vegetation surrounded by a limited number of high use roads, and increase connectivity (and reduce potential road mortality) between occupied and suitable habitat areas to allow expansion and movement of mountain lion occurrences within San Diego County and adjacent counties to increase effective population size to sustainable levels and work to reduce depredation on livestock to ensure persistence in the MSPA over the long-term (>100 years).

Beginning in 2017 and based on linkage assessment results, prepare Linkage Implementation Plan that outlines specific locations and recommendations for improving mountain lion and deer connectivity across SR 78, 76, 79 and other priority roads in MU s 5, 8, 9, and 10.

Beginning in 2019, monitor implementation and effectiveness of linkage enhancements actions for mountain lions and other species, including mule deer.

Beginning in 2017, support efforts by UC Davis Wildlife Health Center and others to test the effectiveness of various methods to deter mountain lions and other native predators from preying on livestock/domestic animals in locations where depredation permits have been issued in recent past, with the goal of reducing depredation permits by 50%.

Beginning in 2019, implement Best Management Practices for deterring mountain lions and other predators from preying on livestock/domestic animals with the goal of reducing depredation permits by 50%.

Beginning in 2019, monitor the effectiveness of BMPs implemented to deter mountain lions and other predators from preying on livestock/domestic animals.

In 2021, implement monitoring actions as identified in the Mountain lion monitoring plan.

Overall Confidence
Current Status
The current overall condition status for the Mountain Lion Species Indicator in the MSPA is rated as Significant Concern. Both Metrics 1 (genetic diversity) and 2 (conserved habitat) are ranked as Significant Concern and were weighted equally. The overall trend for Mountain Lion Indicator is Unknown. It appears that genetic diversity may be declining although another measurement is required to determine a trend. Confidence is High as data sources are recent, reliable, and comprehensive. More information will become available after a long-term mountain lion monitoring plan is developed and implemented, and future reports will include additional metrics on population size, survivorship, evaluation of threats to survival and connectivity, and management to reduce threats.
Metrics Dashboard
Full metric information for this species is available on our Dashboard.
Metrics Dashboard

Relatively abundant throughout the western U.S.; extirpated from nearly all of its historic eastern range [1,2]. Occurs in suitable habitat throughout Mexico, the majority of the Western U.S., western Canada, and a small population in southern Florida [3]. Restricted to mountainous, relatively unpopulated areas [4].

Preferred resting, hunting, and denning sites have vegetative and topographic cover, in addition to steep slopes and high elevations [3]. Structure of vegetation and topography most important criteria for determining habitat use [5]. Avoids open agricultural lands, sagebrush grasslands, open meadows, and pastures. Can thrive in extremely dry climates with limited rainfall [3]. Found from sea level to 4500 m [4].

Active during crepuscular periods; nocturnal pattern adopted in the proximity of human disturbance [3]. Peak activity within 2 hours of sunset and sunrise in absence of human disturbance [4]. Active throughout the year. Most hunting occurs dawn or dusk [13; cited from 4]. May have multiple strategies of migration patterns that allow mountain lions dependent on migratory prey to cope with changing prey densities [14].

Generalist predators [22,23; cited from 3] that primarily eat vertebrate prey [5; cited from 3] with deer often the most frequent prey type [4]. Tendency to kill the older males or young more frequently in prey populations [20,24] due to vulnerabilities from infirmities, solitary habits, and small size [15]. Unused remains covered later for consumption. Stalks from ground [25].

Dispersal of young from the mother coincides with the female coming into estrous as adult males will kill young [23,26,27; all cited from 3; 28]. Dispersal potentially results from mother abandoning the young [21] and there is likely some aggression directed towards the young to prevent them from following her [29; cited from 3]. Can disperse nearly 500 km from their natal home range [23; cited from 3]. Males more likely to disperse from their natal ranges than are the females, and males tend to disperse further [22; cited from 3;30]. Freeways in the area are almost complete barriers to mountain lion movement [11].