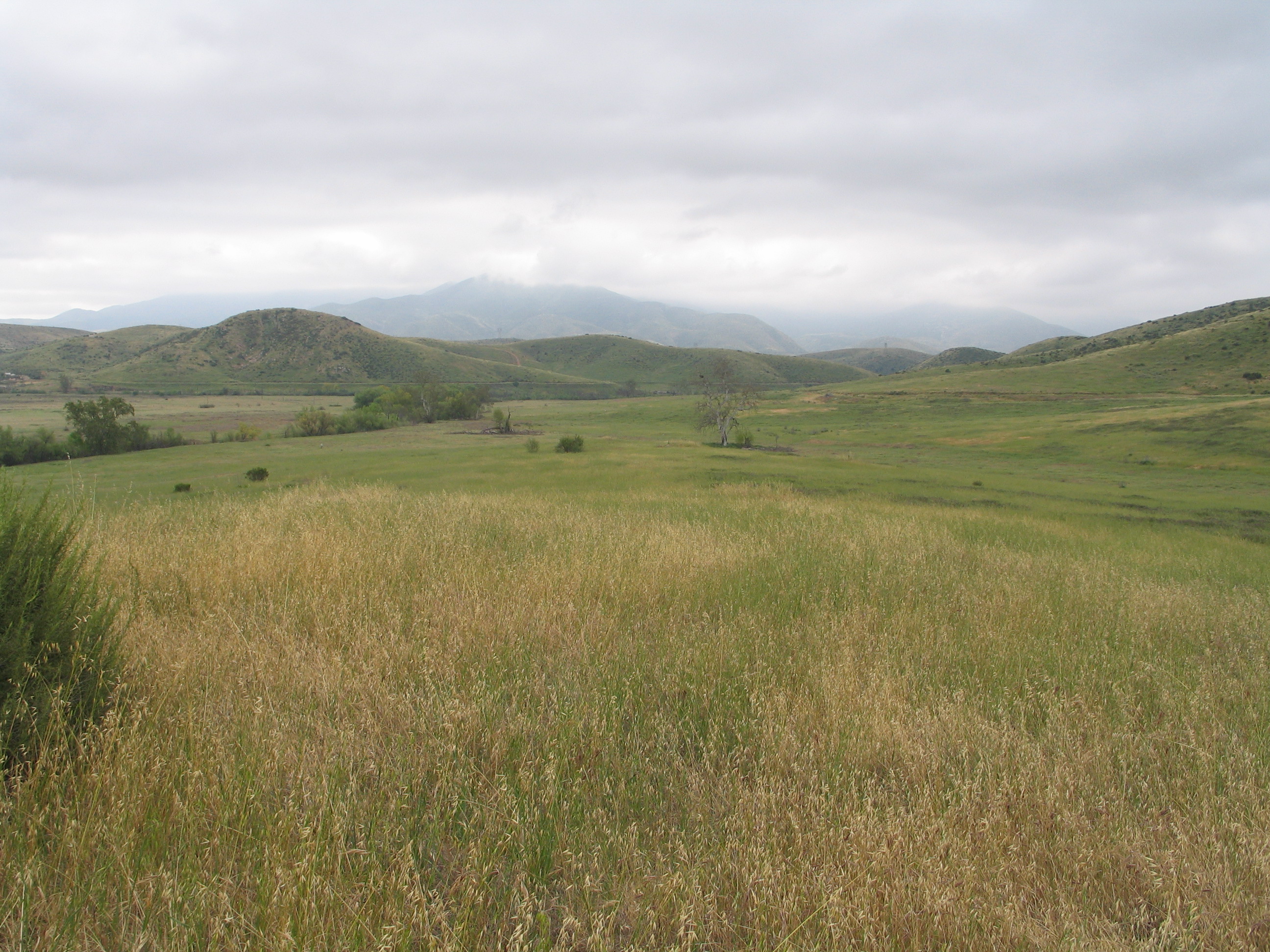 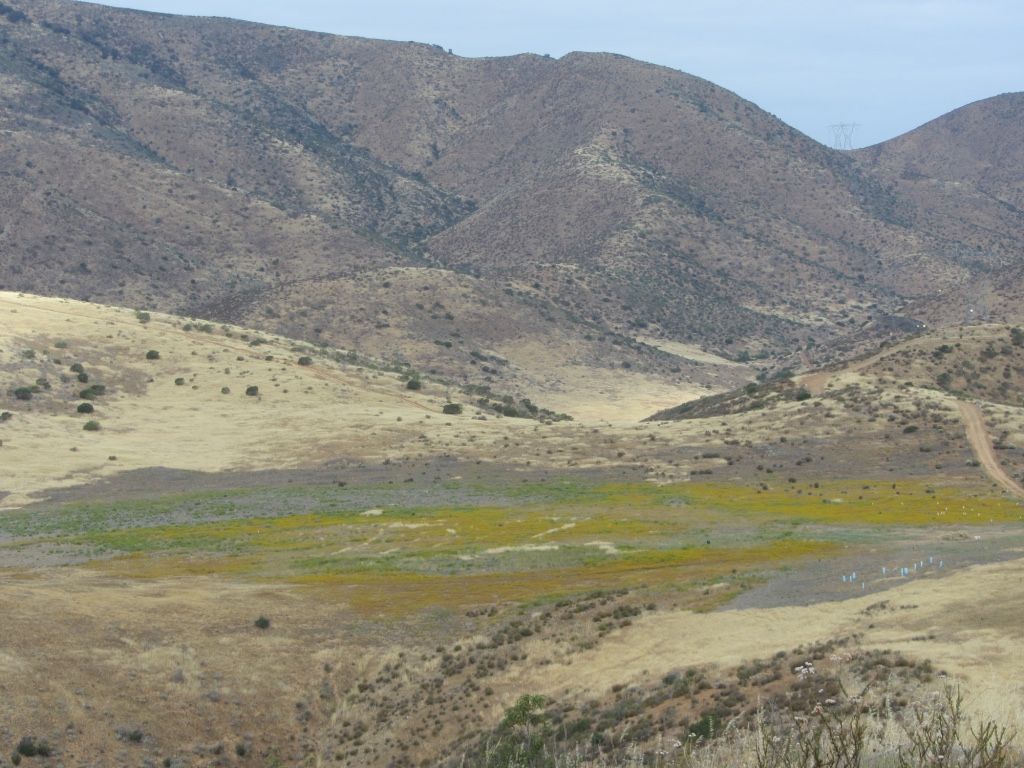 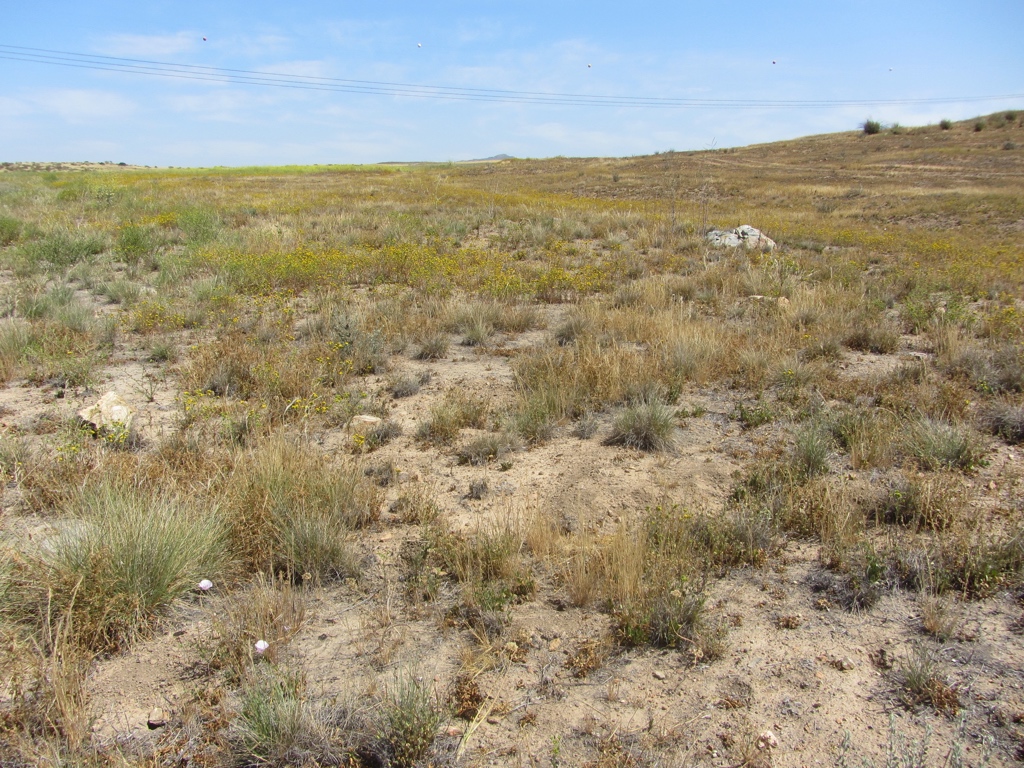 Goal: Enhance and restore native grasslands and forblands and manage nonnative grasslands on Conserved Lands in the MSPA that support or have the potential to support VF species (i.e., grasshopper sparrow and San Diego black-tailed jackrabbit) and to incidentally benefit a diverse array of other species (e.g., Quino checkerspot, burrowing owl, golden eagle, Stephen's kangaroo rat) so that the vegetation communities have high ecological integrity, and these species are resilient to environmental stochasticity and will be likely to persist over the long term (>100 years).

In 2017, prepare a long-term monitoring plan for the mosaic of chaparral, coastal sage scrub and grassland vegetation communities that focuses on tracking community composition, structure and ecological integrity over time in relation to climate (i.e., drought) and disturbance from fire. The monitoring plan should include a conceptual model, specific monitoring questions, the sampling frame within the MSPA, monitoring methods, a statistically valid sampling design, permanent sampling locations, timeline, and standardized protocols. Use the landscape-scale ecological integrity classification map to develop a sampling frame and the sampling design with permanent sampling plots spanning north to south and east to west environmental gradients across the MSPA. Evaluate how the vegetation integrity classes characterize other aspects of the ecosystem by integrating other types of monitoring into the long-term sampling plots, such as abiotic element monitoring (e.g., automated weather stations and soil sensors, GIS-data layers), ecological integrity monitoring (e.g., plant and animal communities, ecological processes), MSP VF species monitoring, and threats monitoring (e.g., fire, climate change, invasive plants). A draft monitoring plan should be prepared in 2017, tested in the field with a pilot study in 2018, and finalized by 2019.

In 2017, develop a landscape-scale map classifying ecological integrity of shrublands across the MSPA based upon shrub cover and density and invasive nonnative annual grasses using remote imagery (e.g., satellite and high resolution aerial imagery, LIDAR) and vegetation data collected during 2015-2016 California gnatcatcher regional and postfire monitoring. Verify and revise the mapping as needed using field data collected in 2018-2020 as part of the Chaparral, Coastal Sage Scrub and Grassland Monitoring Program and from related VF species monitoring (e.g., California gnatcatcher regional and postfire monitoring). Revise the integrity classification map as needed to respond to changes in vegetation based upon wildfires, drought or other large-scale disturbances.

In 2018, conduct pilot monitoring to collect data and develop any recommendations for finalizing the monitoring plan. From 2019 to 2021, implement the final Chaparral, Coastal Sage Scrub and Grassland Vegetation monitoring plan.

Beginning on 2019, prepare a plan to test the use of grazing, prescribed fire and other methods of landscape-scale control of invasive grasses and forbs in grassland and coastal sage scrub vegetation communities as BMPs to promote MSP species, native plants and animals, and natural ecosystem processes. The plan should determine the effects of different techniques on natural resources at less than 200 acre treatment areas at 3 different sites in the MSPA. Development of the study plan's experimental approach should include a review of the literature on the effects of grazing, prescribed fire, and other methods of invasive plant control on coastal sage scrub and grassland ecosystems to develop a conceptual model for management and monitoring. The plan should detail how to test different plant control methods over at least 3 years and should include the specific monitoring questions, objectives, and monitoring targets, a statistically valid experimental design with monitoring methods, sampling locations, and standardized protocols. The plan should include annual monitoring to determine the benefits and impacts of each method on natural resources and to track financial costs, logistics and sustainability of invasive plant control.

Grassland is the third most abundant and widespread vegetation community in the MSPA with 135,749 acres in all MUs, 47,731 acres (35%) of which are conserved [2]. Grasslands in order of abundance are most prevalent in MUs 9, 10, 3, 5, and 6. Valley needlegrass grassland occurs in Alpine (Wright’s Field), Ramona, Olivenhain, San Marcos, Camp Pendleton, Rincon, Mesa Grande, Eagle Peak Road, and Otay Mesa [1]. Valley sacaton grassland occurs in Ramona, Cottonwood Valley, Jacumba, and San Marcos. Saltgrass grasslands occur in Ramona, Lake Hodges, and other areas throughout the county. Nonnative and annual grasslands can be found throughout the County, but notable areas include: Otay Mesa, Barona, parts of Henshaw Valley, Borrego Springs, Love Valley, Santa Maria Valley, and Rancho Guejito. There are 29 MSP species that use grassland habitats; some are closely associated only with native grasslands, while others are affiliated with nonnative grasslands [2].

For nonnative and annual grasslands, germination occurs with the onset of the late fall rains [1]. Growth, flowering, and seed-set occur from winter through spring. With a few exceptions, the plants are dead through the summer-fall dry season, persisting as seeds.

A primary threat to native grassland is loss, fragmentation, and degradation due to urban and agricultural development [2]. In areas altered by high fire frequency, deep tilling of soils, and/or intensive grazing, nonnative bromes and “false” bromes may become abundant and dominate the vegetation [1]. Invasive nonnative grasses and forbs are the largest threat to remaining native grasslands [3]. Nonnative grasses can prevent native ephemerals from sprouting through competitive interactions. Desert vegetation invaded by Bromus rubens and Schismus spp. may convert to semi-natural grasslands with frequent fire [4].