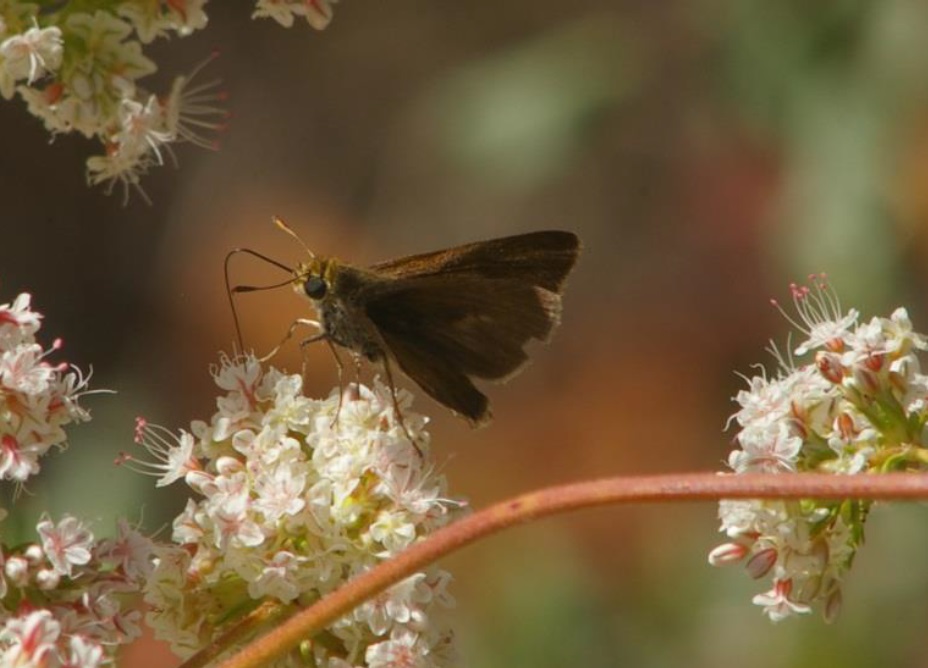 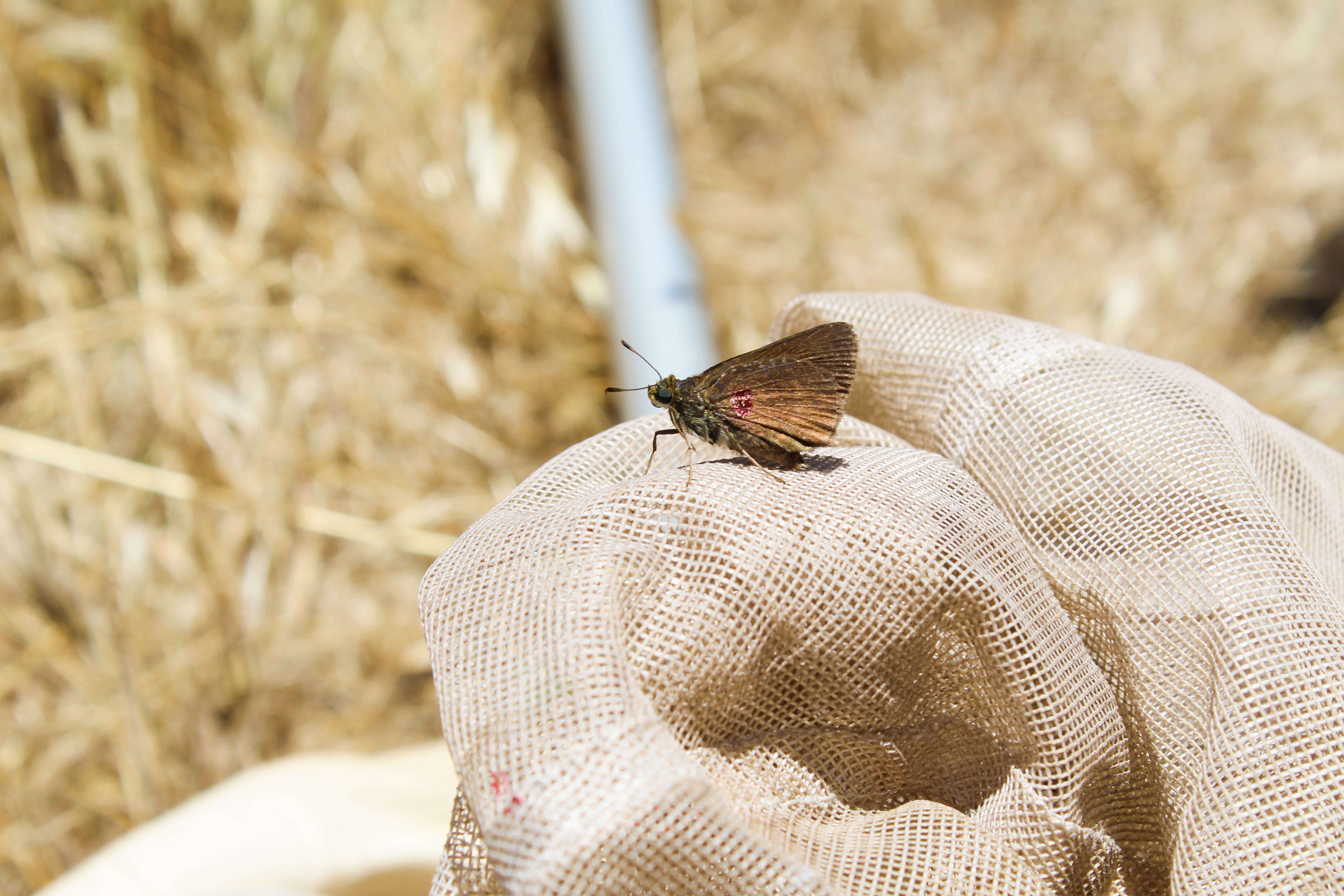 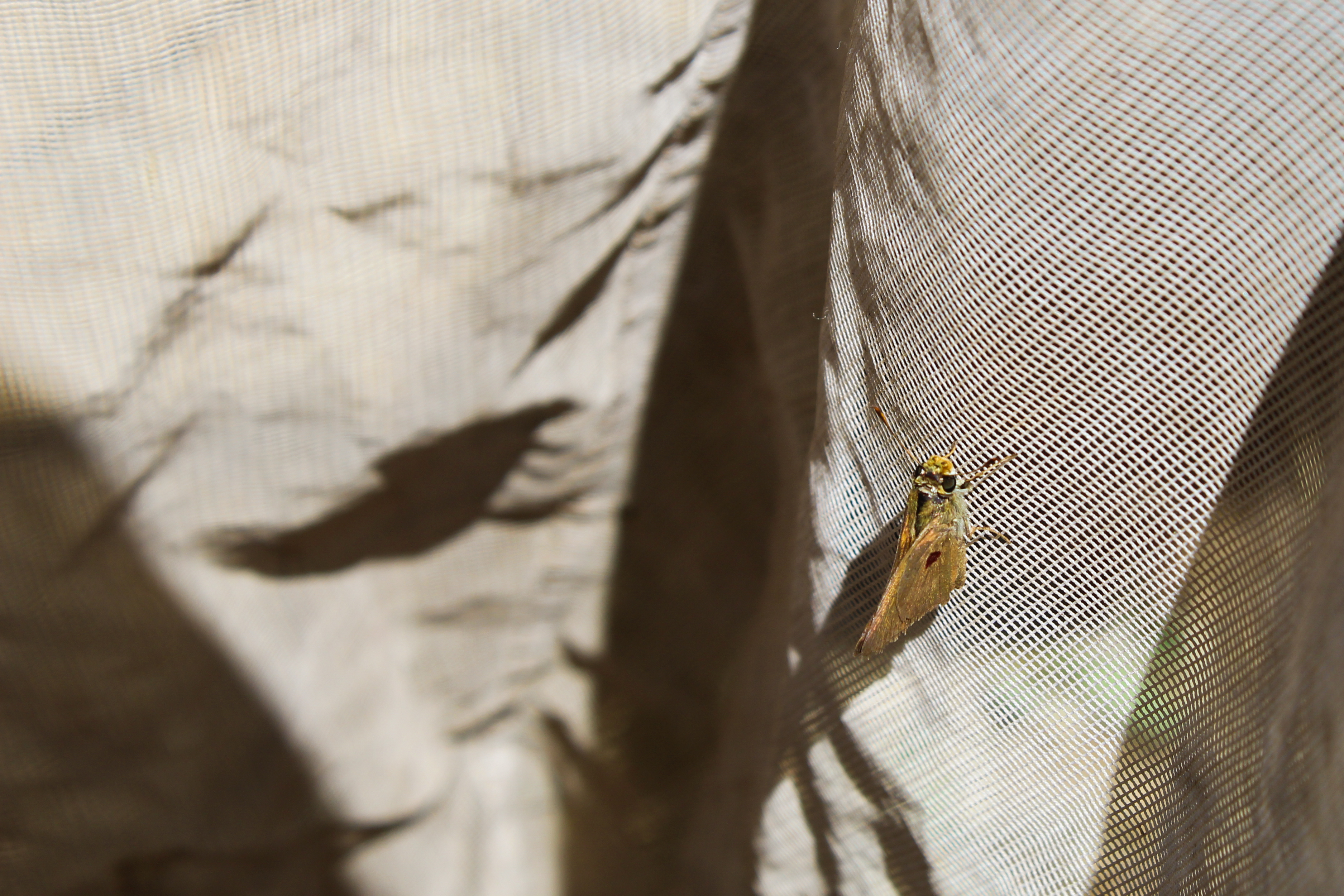 Goal: Protect, enhance, and restore Harbison's dun skipper occupied habitat, historically occupied habitat, and the landscape connections between them to create resilient, self-sustaining populations that provide for persistence over the long-term (>100 years).

In 2017 and 2020, conduct host plant (San Diego sedge), adult, larval and hibernaculum surveys, and habitat assessments for Harbison's dun skipper that were initiated in 2013 in the MSPA (see Table of Occurrences) to further document the butterfly's current distribution and population size, define habitat requirements, and to assess habitat and threats at survey sites.

In 2017, in conjunction with adult surveys and the marking study for Harbison's dun skipper (see Table of Occurrences), capture adult butterflies and collect non-lethal genetic samples (i.e., legs) to analyze population genetic structure, dispersal and connectivity between populations, and genetic diversity. Use the analytical results to develop management recommendations to improve connectivity and to maintain or enhance genetic diversity at Harbison's dun skipper occurrences.

In 2017, conduct a marking study of adult Harbison's dun skippers during the flight season to determine connectivity within habitat patches in a watershed. Design the study to obtain information on local movement patterns, flight season phenology, demography, detection probabilities, longevity, individual behavior, nectaring sources, and relationship between maximum counts and local population size. The results of this study should be used to develop specific management recommendations to be incorporated in the Harbison's Dun Skipper Management Plan.

In 2017, develop habitat suitability models for Harbison's dun skipper, the host plant (San Diego sedge), and oak woodlands under current and future climate change scenarios, and conduct fire risk modeling with different management scenarios to identify potential fire and climate refugia. The results of this modeling will be considered in the development of monitoring and management plans.

In 2017, prepare a 5 year Harbison's Dun Skipper Management Plan that includes the results from butterfly surveys and habitat assessments, genetic and marking studies, and climate and fire modeling to characterize habitat quality at occupied occurrences and unoccupied suitable habitat important for enhancing connectivity, expanding populations or that could serve as fire and climate refugia. The plan should include an overall management strategy, identification and prioritization of sites where management is needed, and specific management recommendations for each site. It should also include actions to reduce fire risk at prioritized occurrences and specifications for monitoring the effectiveness of implementing high priority management actions.

For at least the first 3 years following a wildfire, monitor recovery of Harbison's dun skipper occurrences and habitat affected by fire. Use a standardized postfire protocol to document the butterfly's distribution and abundance over time and to characterize habitat recovery and threats following a wildfire. Postfire monitoring should encompass occupied dun skipper sites and unoccupied sites that are important for enhancing connectivity or for future population expansion. The postfire monitoring should identify and prioritize management actions to assist in recovery of Harbison's dun skipper populations and important habitat patches.

For at least the first 3 years following a fire, implement management actions identified by postfire monitoring as necessary to protect and recover Harbison's dun skipper occurrences and habitat impacted by wildfire.

Endemic to San Diego and Orange County in scattered disjunct colonies [1,2,3; cited from 2]. Range is restricted in part by the distribution of the larval host plant, Carex spissa, the San Diego Sedge, which has limited and spotty distribution from San Luis Obispo County, CA to Baja California Norte, Mexico [4; cited from 1].

Typically found in chaparral or riparian areas that have narrow canyons or drainages. Must be a seep or spring present for the host plant to grow. Oak riparian seems to be preferred location providing enough shade and sun for the butterfly to bask [5]. Butterfly found only in areas with Carex spissa [6; cited from 1].

There are four subspecies of Euphyes vestris: E. v. metcacomet to the east, E. v. vestris to the west, E. vestris kiowah to the north, and E. vestris harbisoni to the south [5].

Single-brooded with flight extending from late May through mid-July [2]. Adult’s primary flight period is late June. Males will patrol canyons not far from the host plant. Females will perch on Carex spissa while basking in the late morning/early afternoon sun [5].

Adults emerge in late spring/early summer, with specimens recorded from May to July. Females deposit pale yellow-green eggs with a red ring and red dot on the underside of host plant leaves. Larvae emerge shortly after and feed near the base of the plant. Second and third instar larvae construct a shelter (hibernaculum) by attaching two to four leaves together where they can be found when not foraging. Fourth, but occasionally third, instar larvae overwinter in these hibernacula. Pupation also occurs in these hibernacula, although larvae will construct more than one shelter. Immediately prior to pupation, the upper end is filled with a white, cotton-like substance, with pupation lasting 18-21 days [7].

Threats to the species include habitat loss and fragmentation, wildfires, drought, water quality, the Goldenspotted Oak Borer (Agrilus auroguttatus), and grazing. Loss of coastal wetlands is well documented but the loss of inland riparian and drainages is not well documented [5,7].

[1] U.S. Fish and Wildlife Service. 1993. Endangered and threatened wildlife and plants; 90-day finding for a petition to list four California butterflies as endangered and continuation of status reviews. Federal Register 50: 38549-38552.