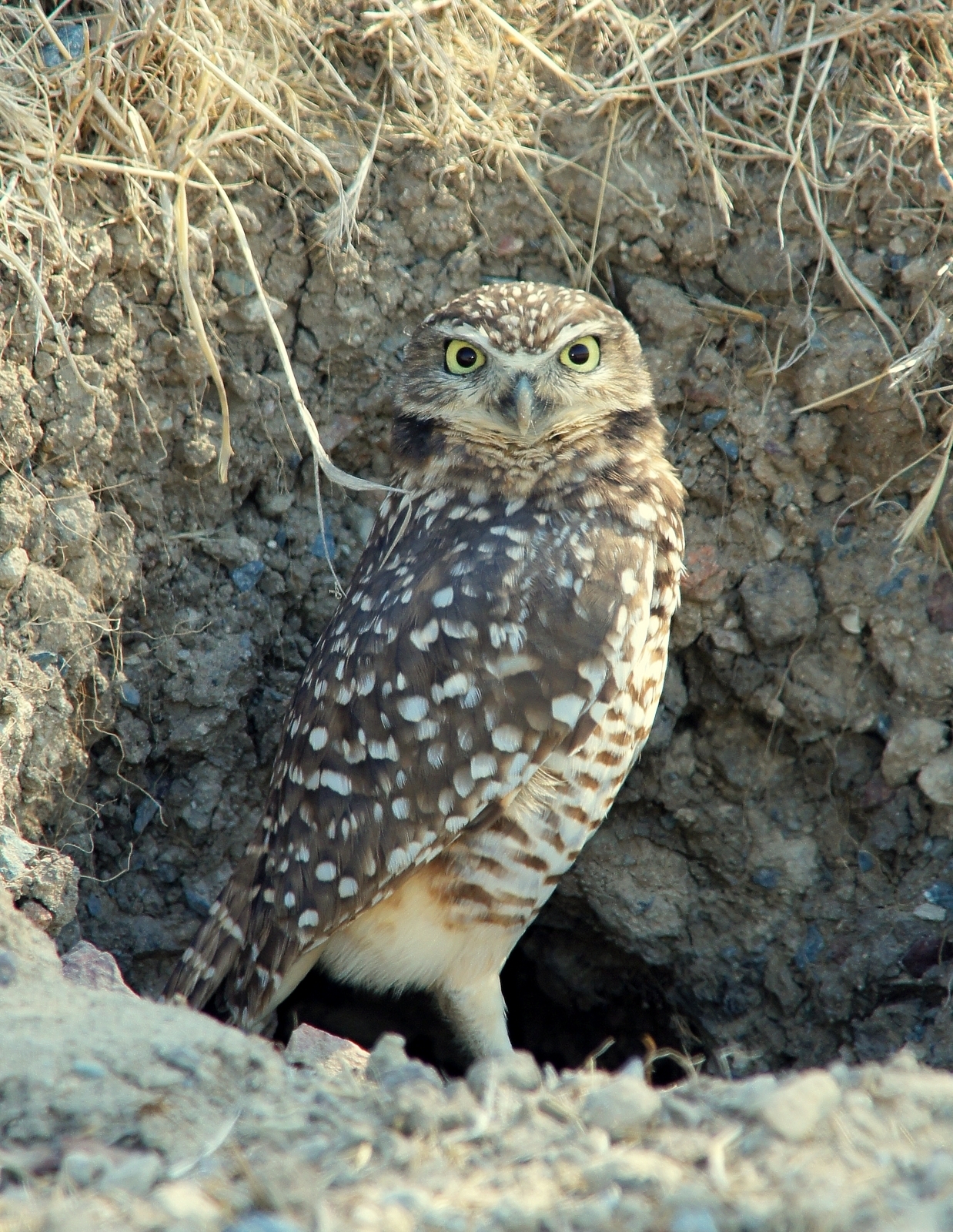 Goal: Increase the abundance of nesting burrowing owls to ensure that there are multiple (=2) interbreeding self-sustaining nodes (primarily utilizing natural burrow systems) on Conserved Lands that will provide for burrowing owl persistence in the MSPA over the long-term (>100 years).

Continue the research study of breeding burrowing owls, foraging, threats, artifiical and natural burrows, movements, and habitat assessments to inform management at existing occupied and future potential nodes. Include translocated owls in the study to determine effectiveness of translocation and to gather information to inform continued management at new nodes.

As part of the burrowing owl research study, collect genetic samples to determine origin of owls and genetic population structure compared to other populations in California, Mexico, and the western U.S.

Annually inspect artificial and natural burrows and occupied habitat to determine management needs using a regional IMG protocol. The monitoring should include considerations for retrofitting existing artificial burrows with the most current design to maximize fledgling success, removal/closing of burrows at poorly performing sites, and addition of burrows to maximize success.

In 2017, finalize the Burrowing Owl Conservation and Management Plan that includes results from the research study and habitat assessments and recommendations for the establishment of at least two nodes and enhancement of existing occurrences to ensure persistence on Conserved Lands and establishment of a captive breeding population as a source for burrowing owls.

Beginning in 2017, monitor the effectiveness of management actions implemented for western burrowing owl on Conserved Lands.

Within the MSPA winters in MUs 1, 2, 3, 4, 5, 6 and 9 [2]. Breeding owls are currently restricted to Otay Mesa and vicinity and to Ramona Grasslands. Outside the MSPA, Naval Base Coronado also supports breeding owls.

Occurs in shortgrass prairies, grasslands, lowland scrub, agricultural lands (particularly rangelands), prairies, coastal dunes, desert floors, and some artificial, open areas as a year-long resident. They require large open expanses of sparsely vegetated areas on gently rolling or level terrain with an abundance of active small mammal burrows. As a critical habitat feature need, they require the use of rodent or other burrows for roosting and nesting cover [1]. In San Diego County, California ground squirrels (Otospermophilus beecheyi) are critical ecosystem engineers, providing burrows for burrowing owls [3]. Ground squirrels have declined in the county and efforts are being made to reintroduce squirrel populations and to develop and implement best management practices to enhance squirrel habitat in order to provide more breeding habitat for owls. Management of squirrel and owl habitat includes controlling non-native annual grasses which degrade habitat quality by growing too tall and dense.

Variously placed in the monotypic genus Speotyto or in Athene, where it has three congeners [1].

The burrowing owl is primarily a diurnal species with crepuscular hunting habits [5]. They may move the location of their perch in order to thermoregulate by perching in open sunlight in early morning and then moving to shade or to the burrow, when temperatures are hot [6].

Breeding occurs from March through August, with a peak in April and May; the clutch size is 6-11 eggs, with an average of 7-9 eggs; this clutch size may increase to the north [7]. The young emerge from the burrow at about two weeks, and they fly by about four [8]. A study of breeding owls on Otay Mesa in San Diego County documented low productivity during drought with incidence of infanticide and predation as major sources of chick mortality [9]. Habitat quality likely affects prey availability which is linked to infanticide and predators such as corvids may be subsidized by human activities. The study compared microhabitat characteristics at artificial and natural burrows and found that artificial burrows did not maintain a stable microclimate, whereas natural burrows did and were better able to buffer nests from changes in external air temperature and humidity.

Diet is composed of a variety of foods included Peromyscus, Microtus and beetles; they also may take reptiles, birds, and carrion [1,9]. They are a crepuscular hunter and hunt by using short flights, running along the ground, hovering or by using an elevated perch from where prey is spotted. They typically forage in short-grass, mowed, or overgrazed pasture, golf courses and airports [5]. In the Otay Mesa study, home range movements were monitored using GPS data loggers and owls were found to have very restricted foraging areas centered around the nesting burrow [9]. There was substantial difference in foraging success between home ranges and owls did not attempt to expand foraging activities into higher quality habitat.

A total of 92 percent of 555 owls that were banded at a nesting area were never re- encountered after the year in which they were banded. The 8 percent that returned to the natal area after being banded, returned one or more years after banding and stayed in the natal area for 2 to 4 breeding seasons.7 Returns of one year old owls were located 2.4 to 26.4 kilometers from the natal nest [1].

Conversion of grassland to agriculture, other habitat destruction, predators, collisions with vehicles, and pesticides/poisoning of ground squirrels. [8, 10, 11]

Special considerations: excerpted from the Western Riverside Co. MSHCP (see [12] and citations within) - The importance of retaining colonies must be stressed, as this species appears to have evolved as a colonial species in association with burrowing mammal communities (Dyer 1987). Minimum viable colony size is unknown. While these owls appear to adapt fairly well to human presence in some cases, i.e., airport runways and other human modified open spaces, the continued presence of active mammal-created burrows is essential. In Oklahoma, the removal of prairie dogs allowed deterioration of burrows, making them unsuitable for nest burrows after one year (Butts 1973). Rodent eradication programs may reduce the consistent availability of high and moderate function habitat. The remaining habitat is often roadside drainage ditches, increasing potential for significant losses to vehicle collisions (Remsen 1978). The available soil type appears to be a factor in nest burrow selection.

[6] Coulombe, H.N. 1971. Behavior and population ecology of the burrowing owl, Speotyto cunicularia, in the Imperial Valley of California. Condor 73: 162-176.