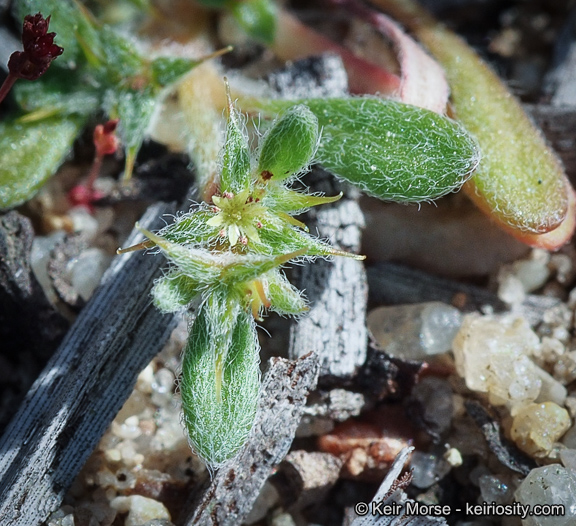 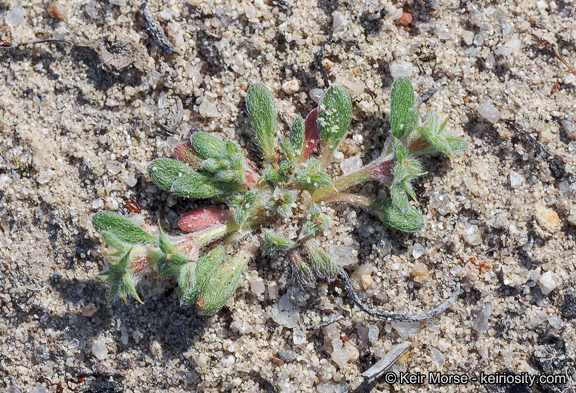 Beginning in 2017, conduct annual surveys of all Orcutt's spineflower.

Beginning in 2017, conduct routine management actions as identified through the IMG monitoring at Orcutt's spineflower occurrences on Conserved Lands (see occurrence table). Depending on the type and level of threat, management should only be conducted as needed, not necessarily every year, and using BMPs with precautions to do no harm.

In 2017, continue efforts begun in 2015 to survey historic Orcutt's spineflower locations to: determine current occurrence status; survey and delineate potentially suitable habitat for new occurrences; survey existing occurrences to identify the potential for enhancement and expansion; and at all sites collect data on occurrence status, habitat and threats and determine management needs.

In 2017, continue BMPs initiated in 2015 to establish 4 new occurrences of Orcutt's spineflower.

In 2019, begin preparing a section for Orcutt's spineflower in the MSP Seed Collection, Banking and Bulking Plan to preserve genetic diversity and rescue occurrences in case of catastrophic disturbance. The plan should incorporate best science and management practices (Wall 2009, KEW 2016) and recommendations from the 2014 genetic study to provide guidance for collecting and storing seeds over the long term at a permanent, established conservation seed bank (e.g., Institute for Conservation Research Native Plant Seed Bank, Rancho Santa Ana Botanic Garden Seed Conservation Program) and for providing a source of seeds for management purposes. The plan should include recommendations for: collecting and storing seeds for conservation banking; management oriented research; rescuing occurrences after catastrophic disturbances; and seed bulking and out-planting to augment extant occurrences or to establish new occurrences with consideration of genetic implications for population sustainability.

In 2020, begin implementing high priority actions for Orcutt's spineflower in the MSP Seed Collection, Banking and Bulking Plan to collect and store seeds at a permanent seed bank and to provide propagules as needed for management oriented research, existing population enhancement and establishment of new occurrences.

In 2019, begin preparing a section for Orcutt's spineflower in the MSP Rare Plant Management Plan to maintain large occurrences (>1,000 plants) and expand at least 3 small occurrences on Conserved Lands (see occurrence table) based upon an assessment of data on occurrence status, habitat and threats. Minimum criteria for enhancement are to reduce invasive annual nonnative plants and thatch to less than 20% absolute cover within the occurrence

Within the MSPA, Orcutt’s spineflower was until recently known only from Torrey Pines Extension in MU7 and previously was extant at Oakcrest Park in Encinitas. The Chaparral Conservancy identified suitable habitat and conducted surveys in 2015 with the help of volunteer botanists. Six new populations were found on Conserved Lands in the vicinity of Carmel Valley, Del Mar Heights, and Pacific Highlands Ranch [4]. There are also four occurrences outside the MSPA at Point Loma Naval Base.

Sandy soils in openings in southern maritime chaparral on coastal bluffs within 5 km of the Pacific Ocean [1,2,5,6].

Overall low genetic diversity among Point Loma populations, which exhibit some within patch diversity, a high degree of selfing, and limited seed dispersal [7].

Annual dicot herb. Large annual fluctuations in population size attributed to pattern and amount of rainfall and number of viable seeds banked in the soil [7]. Removal of ice plant and duff has led to the appearance of Orcutt’s spineflower, indicating seeds may live in soil for decades. Capable of selfing, the importance of outcrossing to maximizing seed set is unknown [6].

The phenology of germination and seedling establishment of this annual plant depends on the timing and amount of rainfall [7].

Little known about pollination or seed dispersal. Potential for Argentine ants to out-compete native insect pollinators [6]? Unknown whether genes disperse by pollen, seeds or both.

Special considerations: This species is considered to have reduced potential for recovery given that there are few populations, little remaining suitable habitat and a high risk of threats [2]. BMPs have been developed by the U.S. Navy to effectively expand populations and to establish new populations [6,7]. Recommendations are to eliminate non-native invasive plants and duff from areas with suitable habitat to see if there may be re-emergence of this species in new locations, given that seeds are likely to be long-lived [1,6,7]. Before seed supplementation is used for restoration, invasive non-native plants should be managed for at least two years of suitable growing conditions to determine if there are viable seeds remaining in soil.