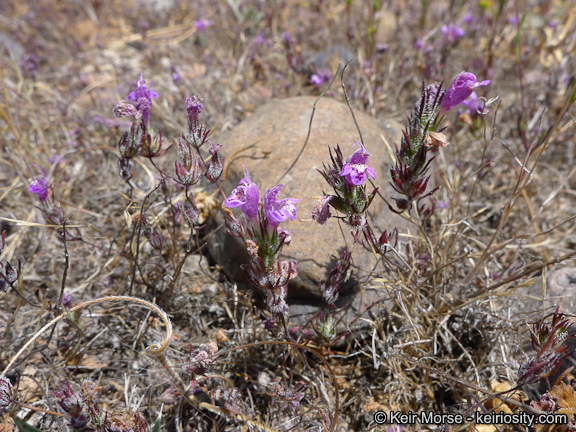 Goal: Protect, enhance, and restore vernal pool habitat on Conserved Lands in the MSPA that supports or has the potential to support VF and SL species (i.e., California Orcutt grass, Otay mesa mint, San Diego button-celery, San Diego mesa mint, spreading navarretia, Riverside fairy shrimp, San Diego fairy shrimp, and western spadefoot) so that the vegetation community has high ecological integrity, and these species are resilient to environmental stochasticity and threats, such as altered hydrology, climate change and invasive plants, and will be likely to persist over the long term (>100 years).

Beginning in 2018, conduct annual surveys for San Diego mesa mint in occupied, historically occupied and potentially suitable vernal pools to determine cover clases in each basin and cover of each nonnative species using a standardize protocol as defined in the VPMMP (City of San Diego 2015). Nonnative cover classes will be combined to determine if management triggers for Level 1, 2 or 3 management are met. Management recommendations will be made, noting individual nonnative species that pose a threat to direct specific management actions. Management actions will be implemented annually as part of the general vernal pool habitat management objectives for different management levels (ML1, ML2, ML3).

Found exclusively in vernal pools with Redding soils and a clay subsoil perched on a hardpan [4]. Found 90-200 m in elevation [1]. San Diego Mesa mint is considered an obligate wetland species (found almost always in wetland areas), but is more tolerant of the seasonal inundation of vernal pool habitats [5].

Mint family (Lamiaceae) [6]. One of 8 recognized species of Pogogyne [4]. John Thomas Howell (1931) separated Pogogyne nudiscula into two species: P. nudiscula and P. abrasmii based on hairs on the calyx, thinner bracts, and geographic distribution [7]. He considered populations north of Mission Valley P.abramsii and all populations on Otay Mesa P. nudiscula. Current work supports this separation and distinction based on the above characteristics and a different number of flowers per node [6].

Blooms from May or June through early July when water is absent from the vernal pool completing its life cycle in the spring rather than in the summer through winter months [5, 9]. The sparsely hairy, small bell-shaped purple flowers have a yellow or white throat and diagnostic hairy style [4]. It has two flowers per node on the stem [6]. Vegetation gives off a reddish tinge as plant matures [8]. The link between the onset of germination, the temporal conditions needed for vernal pool inundation, temperature, and moisture are critical to the germination, maturation, flowering, and fruiting [2].

The Eurasian honey bee (Apis mellifera) and two anthophorid bees (Exomalopsis nitens and E. torticornis) are the most common and likely pollinators of P. abramsii [10]. Potential pollinators in nearby chaparral were also found visiting vernal pool flora [11]. Self-fertile, but greater seed set when cross-pollinated [10]. Seeds float, which may result in dispersal opportunities when pools interconnect [12]. Waterfowl visit pools and are presumed to dispersal agents [13]. Small animal movement may be a potential vector for seed dispersal and gene flow between vernal pool obligate species [14].

Threatened by OHV use, military activities, alteration of watershed, habitat fragmentation and isolation of vernal pool systems and complexes, degradation due to filling, grading, discing, and leveling, invasion from weedy nonnative plants, human access and disturbance, trampling, small population size, soil compaction, erosion, drought and climate change, and fire control activities [15]. Destruction of watersheds and disruption of hydrological systems can create further impacts by creating barriers to dispersal, such that pollination and reproductive output may be inhibited [11,12].

Examination of occurrence data from the time of listing suggests that the distribution of Pogogyne abramsii has decreased since its listing in 1978 [5]. Rainfall and temperature both affect the germination rate and successful reproduction [12]. Soil moisture late in the season is probably as important as is actual duration of standing water for this species therefore drought may play an important role in restricting the species to pool basins where soils are saturated longer and retain water in the spring [15]. Modifications to the uplands associated with a vernal pool complex can impact the pool’s hydrology, even if they occur outside the pool’s surface area [4].