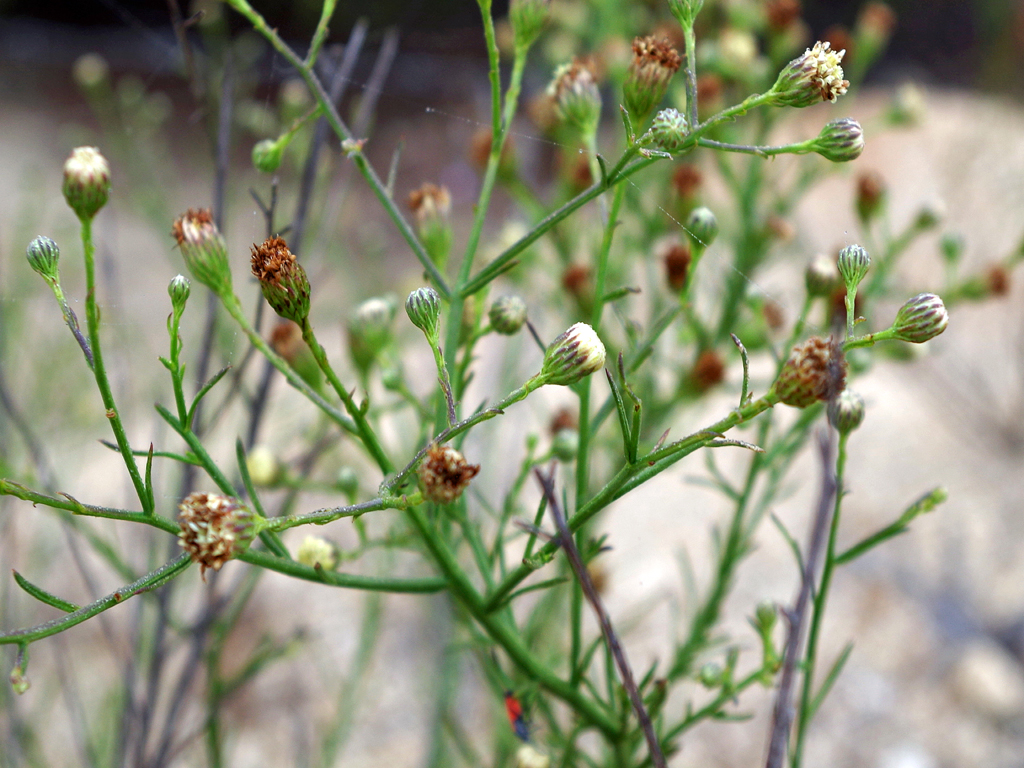 Beginning in 2017, conduct routine management actions identified through the IMG monitoring at Encinitas baccharis occurrences on Conserved Lands (see occurrence table). Depending on the type and level of threat, management should be conducted as needed, not necessarily every year, and using BMPs with precautions to do no harm.

In 2017, continue a study begun in 2016 to characterize the population genetic structure, gene flow, and genetic diversity for Encinitas baccharis occurrences (see occurrence table). The study will determine if there is evidence of mixed ploidy levels within or among occurrences; evaluate vulnerability of occurrences to genetic drift and loss of genetic diversity; assess the level of gene flow among occurrences; identify if there are signatures of genetic bottlenecks or low genetic diversity in occurrences that have undergone recent reductions; and look for evidence of local population adaptation. Based on the results of the genetic analyses, management recommendations will include whether common garden and reciprocal transplantations are necessary before proceeding with population enhancement or restoration and will provide specific recommendations for collecting, bulking and distributing seed to enhance existing occurrences or establish new occurrences.

In 2018, begin preparing a section for Encinitas baccharis in the MSP Seed Collection, Banking and Bulking Plan to preserve genetic diversity and rescue occurrences in case of catastrophic disturbance. The plan should incorporate best science and management practices (Wall 2009; KEW 2016) and provide guidelines for collecting and storing seeds over the long term at a permanent, established conservation seed bank (e.g., Institute for Conservation Research Native Plant Seed Bank, Rancho Santa Ana Botanic Garden Seed Conservation Program) and for providing a source of seeds for management purposes. The plan should include recommendations for: collecting and storing seeds for conservation banking; management oriented research; rescuing occurrences after catastrophic disturbances; and seed bulking and out-planting to augment extant occurrences or to establish new occurrences with consideration of genetic implications for population sustainability.

In 2019, begin implementing the MSP Seed Collection, Banking and Bulking Plan for Encinitas baccharis to collect and store seeds at a permanent seed bank and to provide propagules as needed for management oriented research, existing population enhancement and establishment of new occurrences.

Begin preparing a section for Encinitas baccharis in the MSP Rare Plant Management Plan that prioritizes management actions to maintain or expand occurrences on Conserved Lands based upon an assessment of data on occurrence status, habitat and threats. Prioritize management recommendations to maintain large occurrences and enhance at least 3 small occurrences (see occurrence table). Minimum criteria for enhancement are to reduce invasive annual nonnative plants and thatch to less than 20% absolute cover within the occurrence.

Overall Confidence
Current Status
The overall condition status for the Encinitas Baccharis Indicator is Caution based on consideration of the three metric condition values. There are signs of potential improvement of the species status due to the discovery and conservation of new occurrences (Metric 1) and some increases in population size, although most occurrences are small and some are declining (Metric 2). Besides the threat of small and isolated occurrences with little sign of recent recruitment, other landscape-scale threats are an altered fire regime and long-term drought. Monitoring shows some serious threats that can be managed at occurrences including competitive native plants, nonnative annual grasses and forbs, trails, trampling, and dumping (Metric 3).
Metrics Dashboard
Full metric information for this species is available on our Dashboard.
Metrics Dashboard

Taxonomic classification and nomenclature of this species have not changed since described in 1980 [3]. A slender-stemmed shrub in the Asteraceae family, <2m tall from root crown, broom-like [6]. Distinguishable from other Baccharis by numerous, erect, glabrous stems; linear, entire leaves with only one principal vein; and delicate, narrowly tapered phyllaries (bracts that form inflorescence), which are reflexed at maturity [3, 7]. No studies focused on genetics [3].

Dioecious (plants have either male or female flowers). Staminate (male) flower heads contain clusters of 8-48 florets with white to pale yellow corollas, and pistillate (female) flower heads contain 8-150 florets with whitish corollas [6]. Probably pollinated by both wind and insects [3]. When federally listed (1996), rangewide population estimated to be ~2,000 individuals (CNDDB 1991 cited in USFWS 2011); lack of rangewide surveys so no accurate counts exist. Several attributes may limit distribution and population growth: (1) being restricted to a narrow belt of high-diversity chaparral having frost-free winters and summers moderated by cool, humid maritime air; (2) seedling establishment may be a rare event limited to formation of a canopy gap followed by an extended rainy season through late spring, or a few heavy rains during summer; (3) dioecious reproduction so both sexes needed for seed production [3].

Baccharis plants produce one-seeded dry fruits (achenes) attached to a cluster of bristly hairs (a pappus) which facilitates wind dispersal (Steinberg 2002 cited in USFWS 2011). Soils types may limit population dispersal [1]. Baccharis species appear to depend on disturbance for colonization and recruitment; this species appears to increase in numbers after disturbance that opens chaparral canopy, including fire (Messina 2001 cited in USFWS 2011). Can resprout following fire [3].

Primary threats when federally listed (1996) related to habitat loss, fragmentation, and degradation due to development; fuel modification and fire suppression activities (e.g., cutting and crown removal); trampling; small population size; interruption of the natural fire cycle; and nonnative plants. [3,8]. Some recent reduction in threats from urbanization and recreation. However, additional threats include potential impacts of parasitism, climate change, low recruitment, and lack of adequate representation of both sexual forms at population occurrences [3]. Limits of insect pollinators in isolated populations are important consideration [9].

May be unable to compete with taller, leafier shrubs such as manzanita (Arctostaphylos spp.) and ceanothus (Ceanothus spp.) or may be short-lived (KEA Environmental Inc. 1999 cited in USFWS 2011). Long-term storage in seed banks not feasible because plant oils decay rapidly (D. Wilken pers. comm., 2010 cited in USFWS 2011). Attempts at local transplantation have not been very successful; nursery-grown stock should be transplanted to conserved land within its historical range [1].