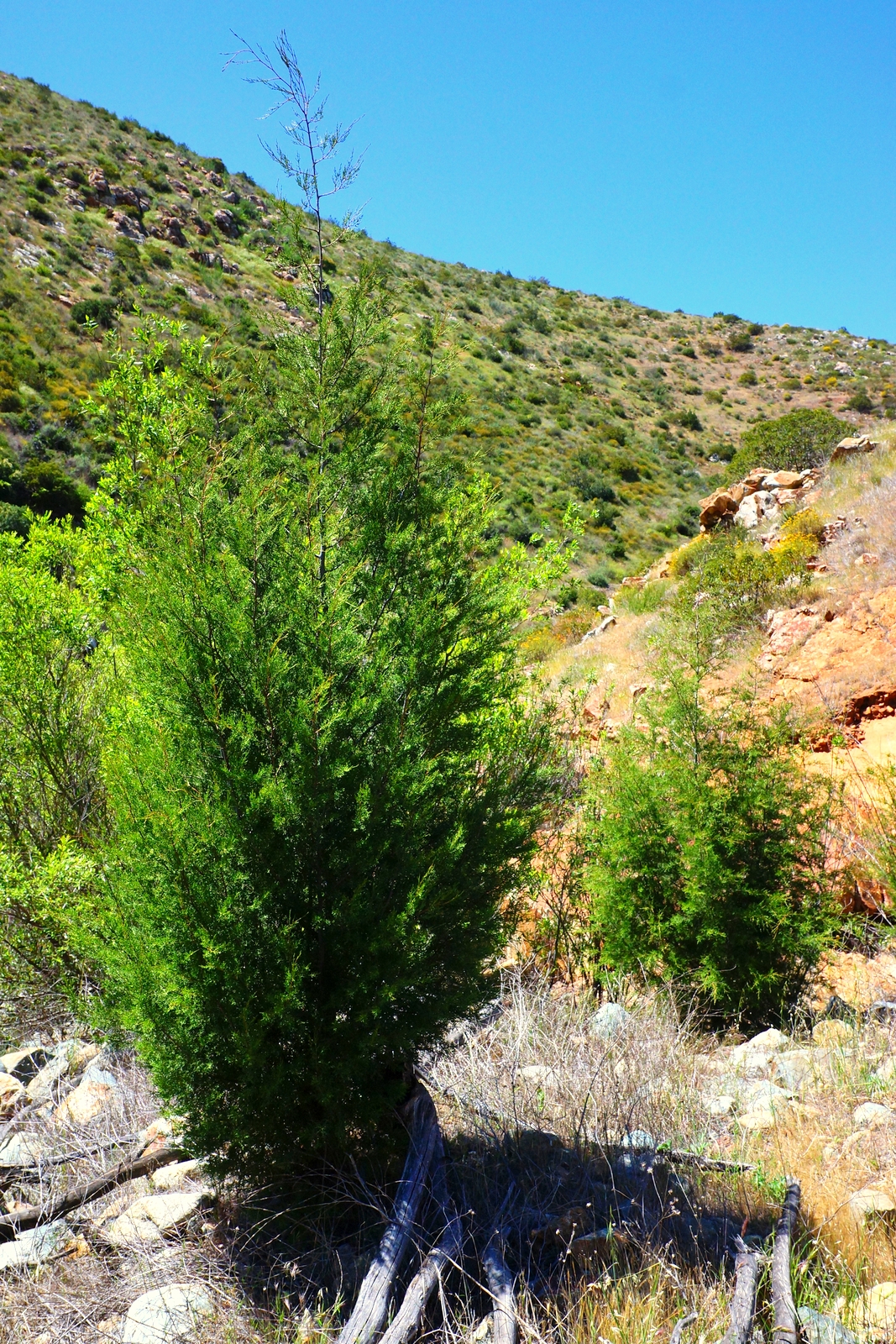 Goal: Maintain and enhance Tecate Cypress Forest on Conserved Lands in the MSPA so that the vegetation community has high ecological integrity, and is resilient to environmental stochasticity, threats and catastrophic disturbances, such as altered fire regime and climate change, and will be likely to persist over the long term (>100 years).

In 2018, map tree mortality in Tecate cypress forests using high resolution aerial imagery, LIDAR and other remote sensing data and incorporate existing datasets, where available, to determine the current status of riparian forest and scrub in the MSPA that are affected by drought, wildfire and invasive pests and fungal pathogens.

Southern interior cypress forest is a moderately dense, fire-maintained, low forest dominated by Hesperocyparis nevadensis (Piute cypress), H. stephensonii (Cuyamaca cypress) and H. forbesii (Tecate cypress) [1]. The canopy is open to intermittent, depending on stand age and substrate development, with trees up to 16 meters tall [18, 1]. Often occurs as isolated groves within a matrix of chaparral or pinon-juniper woodland [4]. The shrub layer can range from intermittent to continuous, and the herbaceous layer is sparse to intermittent [2], leaving cypress seeds with the bare mineral soil required for germination and establishment [3]. There are 6 MSP species associated with southern interior cypress forest vegetation.

Southern interior cypress forest extends from the Southern Sierra Nevada and Peninsular Ranges south into Baja California [1]. Elevations vary with species: 300-1375 meters for C. forbesii and 300-1675 meters for C. stephensonii. There are fifteen known populations of Tecate cypress, with three located in San Diego County: Guatay Mtn., Otay Mtn., and Tecate Peak [8, 9; cited in 3; 18]. Stands exists to the north of San Diego in the Santa Ana Mtns. of Orange County and to the south in Baja California, Mexico [10; cited in 3; SD Co Veg classification manual; 11]. The Cuyamaca cypress is the rarest California cypress with only four known populations at Cuyamaca Peak in San Diego County [6], and a population of unknown size in Baja California, Mexico [5].

Cuyamaca and Tecate cypress are both fire-adapted and fire-dependent species with serotinous cones [2, 12]. The ideal fire interval for Tecate cypress, based on peak cone reproduction, is 40-50 years [13]. Trees grow up to 10 meters high under favorable conditions, but on sites with high plant density following a fire, plants may be only 1-2 meters at maturity [14; cited in 3]. Seedlings are shade intolerant and establish best on bare soil.

An unnaturally short fire return interval could lead to too few cones and seeds being produced, threatening both cypress species existence [12]. The present fire interval is much shorter than historic intervals, preventing cypress trees from building up adequate seed reserves, leading to local population extirpation [15]. Once well represented at the King Creek Research Natural Area in the Cleveland National Forest, Cuyamaca cypress populations incurred a 70% loss following the 2003 Cedar Fire [7]. Grazing and trampling by livestock are detrimental to cypress seedlings. Nonnative grasses could harm cypress seedlings by increasing the flammability and probability of a surface fire. Invasive grasses increase fire frequency, but decrease the fire severity, creating a positive feedback that facilitates the conversion of shrubland to nonnative annual grassland [17].

The Thorne’s hairstreak butterfly (Callophrys [Mitoura] gryneus thornei), an endemic to Otay Mountain, is dependent on the Tecate cypress. It lays its eggs solely on Tecate cypress trees, and the larvae feeds exclusively on Tecate cypress [16]. The 2003 Otay/Mine fire burned all of the known Tecate cypress at Otay Mountain and the 2007 Harris fire reburned a large portion. These butterflies are thought to be few in number, but the USFWS decided in 2011 not to list the species. Maintaining a natural fire return interval of 40-50 may be the key to preserving Tecate and Cuyamaca cypress groves [15, 17]. There is a potential senescence risk when the return interval is greater than 50, reducing the viability of the tree’s seeds. A return interval of less than 40 years is also a problem as trees may not have time to reach reproductive age and produce a sufficient amount of seed cones before they are killed in a fire. A shortened fire return interval also increases the potential of the habitat being invaded by shrubland. A study of the Tecate cypress populations in the Santa Ana Mountains, revealed refugia where trees remained unburned, despite being right next to or in the middle of areas that had burned 4, 5, or 6 times in the last century [17]. These areas did hold reproductively active adults, but they are located on the edges of the distribution and unlikely to disperse to higher elevation populations. Recommended conservation strategies focus on improving seed supplies in the higher elevation areas that are suitable for recruitment but are lacking adult seed input. It would be beneficial to monitor Tecate cypress annually for five years to establish the year-to-year variability in cone production, seed viability, and recruitment during fire-free years [17]. Once these baseline data are collected, population monitoring can be reduced to five year intervals. This collected data will lead to a better understanding of the cypress’s life history and the population’s sensitivity to climatic and environmental change.