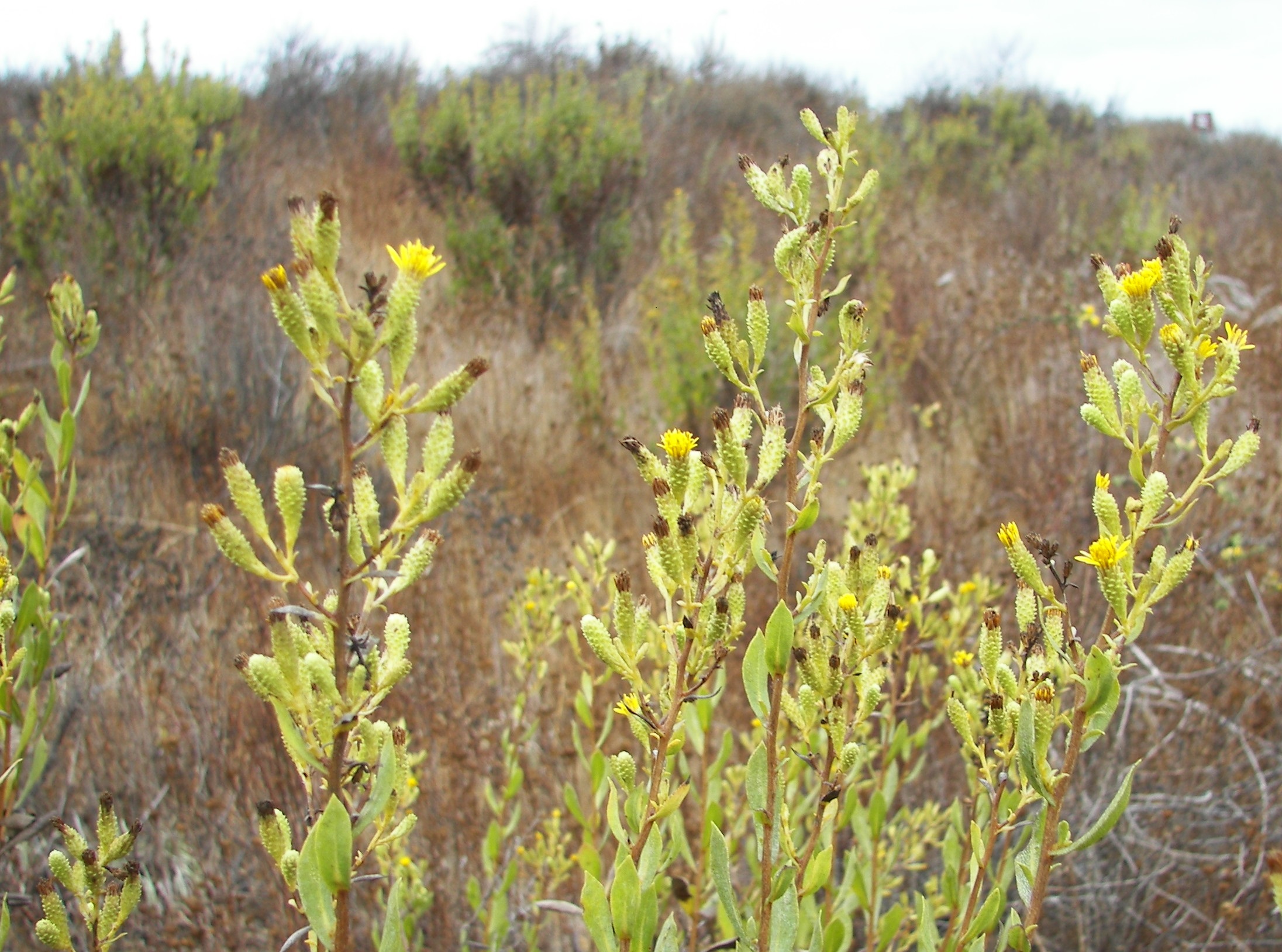 Beginning in 2017, conduct routine management actions identified through 2016, 2018 and 2020 IMG monitoring of Orcutt's hazardia occurrences on Conserved Lands (see occurrence table). Depending on the type and level of threat, management should be conducted as needed, not necessarily every year, and using BMPs with precautions to do no harm.

In 2017, begin preparing an Orcutt's hazardia section in the MSP Seed Collection, Banking and Bulking Plan to preserve genetic diversity and rescue occurrences in case of catastrophic disturbance. The plan should incorporate best science and management practices (Wall 2009, KEW 2016) and recommendations from the 2014 genetic study to provide guidance for collecting and storing seeds over the long term at a permanent, established conservation seed bank (e.g., Institute for Conservation Research Native Plant Seed Bank, Rancho Santa Ana Botanic Garden Seed Conservation Program) and for providing a source of seeds for management purposes. The plan should include recommendations for: collecting and storing seeds for conservation banking; management oriented research; rescuing occurrences after catastrophic disturbances; and seed bulking and out-planting to augment extant occurrences or to establish new occurrences with consideration of genetic implications for population sustainability.

In 2018, begin implementing high priority actions for Orcutt's hazardia in the MSP Seed Collection, Banking and Bulking Plan to collect and store seeds at a permanent seed bank and to provide propagules as needed for management oriented research, existing population enhancement and establishment of new occurrences.

In 2017, begin preparing an Orcutt's hazardia section in the MSP Rare Plant Management Plan that prioritizes management actions to maintain or enhance occurrences on Conserved Lands (see occurrence table) based upon an assessment of data on occurrence status, habitat and threats. Minimum criteria for enhancement are to reduce invasive annual nonnative plants and thatch to less than 20% absolute cover within the occurrence

Issues concerning genetic stochasticity are particularly important [2]. At the native site in the US, H. orcuttii exists from a single small population distributed in one area. Recruitment rate may be low and insufficient to provide for the long-term replacement of individuals at this location. H. orcuttii and H. squarrosa var. grindelioides are capable of hybridizing when in close proximity (about 30 m) of each other [1].

Only 6 percent of the seeds produced at the native occurrence were viable, while insects or fungal agents damaged approximately 50 percent [4]. There was a very limited soil seed bank observed at MCA.

Habitat at MCA is protected from direct development, though it remains threatened by human impacts from recreation [2]. Impacts include habitat degradation due to pedestrian use, on- and off-leash dogs, and bicycle trails near plants. Insects and fungal agents damaged 95 of the flowers examined in 2006 and 50 percent of the seeds produced [5, cited in 2]. If this persists, pest and fungal agents could be a threat to reproduction and native occurrences. Small populations vulnerable to extirpation by demographic, environmental, and genetic stochasticity, and natural catastrophes. At translocated locations, hybridization with H. squarrosa var. grindelioides could threaten genetic distinctiveness of H. orcuttii [1]. Additional potential threat from alteration of fire regimes [3].

In October 2000, the Encinitas Fire Department cleared habitat at the MCA for training purposes [2]. This was against management guidelines and occurred without CNLM's consent. Some of the previously occupied habitat no longer supports these plants; however, it is unknown how much habitat is no longer suitable. In 2001, RECON Consultants collected seed from the native occurrence at MCA and grew plants in containers until they reached 1 and 2 years of age. Subsets were out-planted at various test sites starting in 2003. The 4 test populations established were (1) northeast mesa at MCA, (2) Rancho La Costa Conservation Area, (3) Kelly Ranch Habitat Conservation Area, and (4) San Elijo Lagoon Ecological Reserve. Since 2007, the number of seedlings on northeastern mesa of MCA has increased significantly, indicating reproduction is occurring and increasing annually. The San Elijo Lagoon population is in decline and seedling recruitment (reproduction) has not been observed.