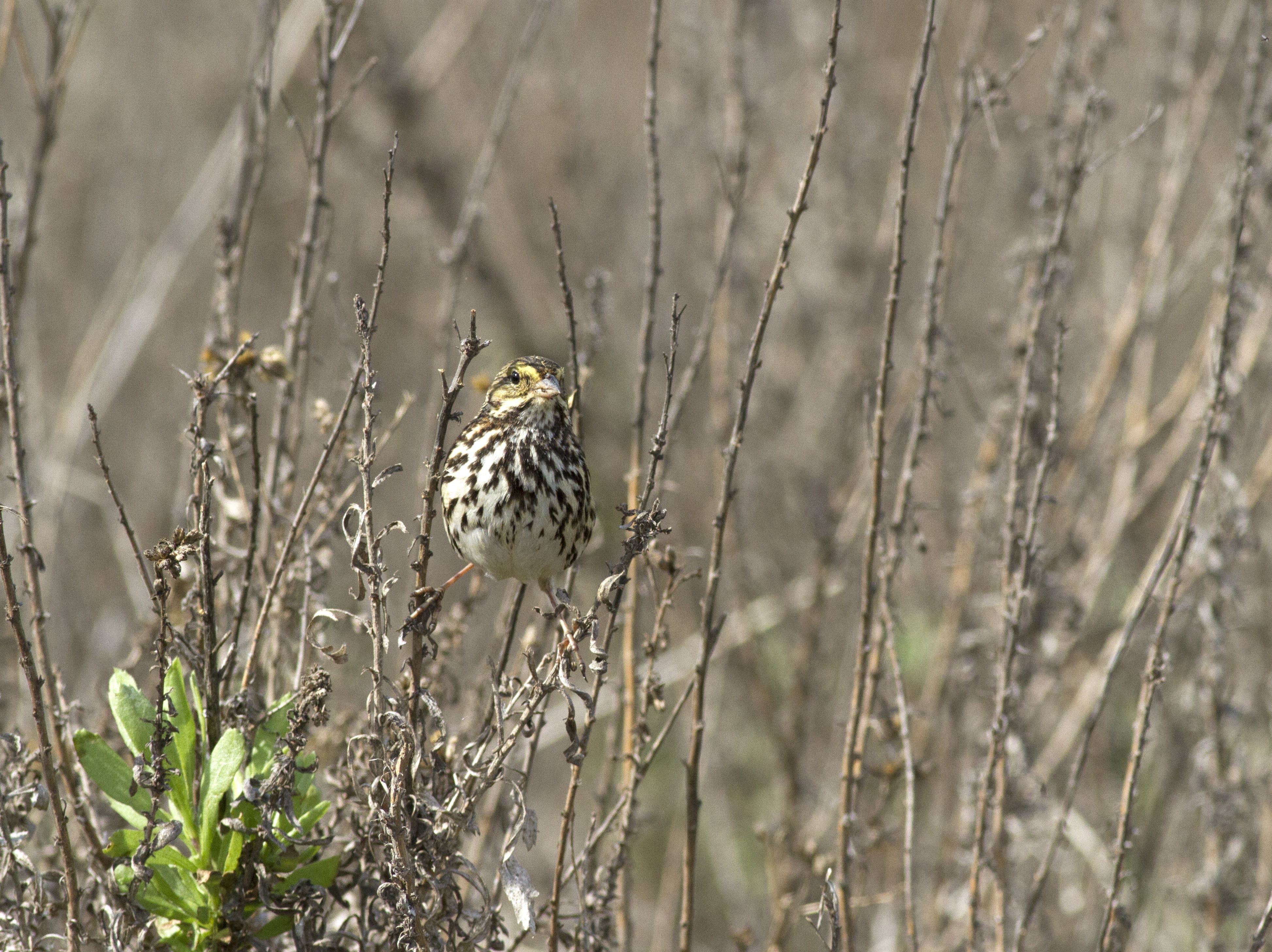 Goal: Maintain, enhance and restore salt marsh vegetation on Conserved Lands in the MSPA that supports or has the potential to support VF species (i.e., wandering skipper, Belding's savannah sparrow) and to incidentally benefit other MSP species (e.g., salt marsh bird's-beak, Ridgway's rail) so that the vegetation community has high ecological integrity, and these species are resilient to environmental stochasticity and threats such as climate change, and will be likely to persist over the long term (>100 years).

In 2019, develop a regional, long-term monitoring plan to integrate habitat assessment and threat evaluations into the Belding's savannah sparrow population monitoring conducted by the California Department of Fish and Wildlife on Conserved Lands in the MSPA. Develop a sampling design and standardized protocol to assess habitat and threats at occupied, historically occupied and suitable unoccupied habitats for the sparrow. Design the habitat and threats assessment to inform regional salt marsh vegetation monitoring. The purpose of the plan is to use habitat and threat monitoring data to develop site specific management recommendations to maintain, enhance or restore Belding's savannah sparrow habitat.

Nonmigratory; endemic to the coast of southern California and northern Baja California [1].

Prefer to build their nests on or near the ground, concealed from above, within habitats dominated by dense pickleweed, particularly Salicornia virginica. Nests have been located in pickleweed, shore grass, and saltwort [3]. Conducting an accurate survey can be difficult since they are secretive and forage throughout a marsh, many times away from nesting sites [4, 5].

Nonmigratory and endemic to the coast of southern California [7]. During the winter individuals may form loose flocks, which appear to be aggregations around food-rich patches rather than social groups [8].

Breeds from April into July, peaking in May and June [9]. Females lay an average of 2-6 eggs per clutch; often double-brooded. Incubation is 10-13 days with altricial young fledging in 7-14 days [10]. Incubation and brooding mostly by female [11]. The primary habitat is the upper marsh zone that is flooded infrequently by the tide. In order to sustain the pickleweed and prevent the invasion of upland plants, the marshes must be flooded regularly, but not so deeply or for so long to preclude the birds from nesting. The birds nest only in this zone, though they range outside it to forage. Nesting success is higher where the marsh plants are denser and taller [3, 12].

Belding’s savannah sparrows forage throughout the marsh, within the vegetation, along intertidal mudflats, and sometimes on neighboring sand dunes [1, 4]. Generally eat grass, seeds, insects, snails, and spiders. Invertebrates are the predominate food source in the breeding season, while seeds are more important the remainder of year. Scratches and gleans on ground, and picks food directly from low plants [9].

Limited dispersal and exists as a metapopulation with extirpation and recolonization of local populations [1, 13, 14].

Destruction or degradation to salt-marsh habitat due to the direct impact of urban development. Human impacts, such as trespassing into restricted areas, off-trail use in public areas, and feral animals entering into the marsh represent a serious threat to survival.

Narrowly restricted to coastal marshes dominated by pickleweed [6]. Pickleweed habitats have been degraded by changes in tidal flow and freshwater inputs, invasion of nonindigenous plants, and fragmentation by trails and roads. Restoration of this habitat type is difficult and may not result in suitable nesting habitat for sparrows [15].

[13] Bradley, R.A. 1994. Cultural change and geographic variation in the songs of the Belding’s savannah sparrow (Passerculus sandwichensis beldingi). Bulletin of the Southern California Academy of Sciences 93: 91-109.