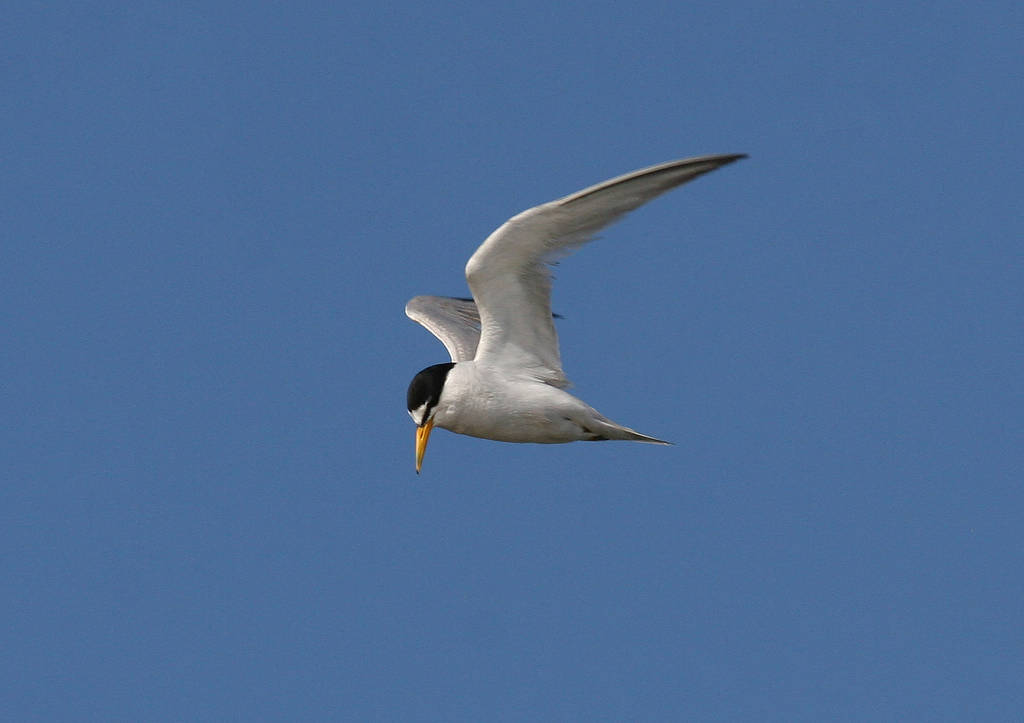 From 2017-2021, annually conduct predator control at breeding least tern colonies before and during the nesting season to improve fledgling success. Include tracking of predator-tern interactions to provide real-time data to improve control efforts during the breeding season.

From 2017-2021, monitor the effectiveness of predator control at least tern colonies and monitor overall tern predator status and trend to identify larger issues potentially affecting other MSP species and to improve management effectiveness.

From 2017 to 2021, continue the existing survey efforts for California least tern implemented by the wildlife agencies and military.

From 2017 to 2021, annually inspect the existing nest sites for California least tern, taking precautions to avoid disturbance during the nesting season, to identify necessary management actions in order to support the expansion of the occurrence to self sustaining levels.

From 2017-2021, perform routine management activities such as invasives removal, sand replenishment, nest prep, and protecting occurrences from disturbance through fencing, signage, and enforcement.

Nest in colonies on relatively open, flat beaches kept free of vegetation by natural scouring from tidal action and along lagoon or estuary margins [1;3 cited from 2]. Forages along seacoasts, beaches, bays, estuaries, lagoons, lakes, and rivers [5 cited from 2]. Rests and loafs on sandy beaches, mudflats, and salt-pond dikes [6 cited from 2].

A subspecies of least terns where two other subspecies, Interior (S. a. athalassos) and Eastern (S. a. antillarum), are recognized in the United States [7 cited from 4]; however, there is little genetic variation among the subspecies which questions the validity of this division [8 cited from 4]. A taxonomic change by the American Ornithologists' Union (AOU) [9 cited from 4] resurrected the genus Sternula for the least tern based on genetic studies.

Fall migration commences the last week of July and first week of August. Several weeks before the Fall Migration, adults and young wander along marine coastlines, congregating at prime fishing sites. In the autumn, adults move south along the california coast with their fledglings stopping to rest and feed along the migration route [2;10 cited from 1].

Arrive at California nesting sites in late April, where courtship and pair formation activities last into early May [10 cited from 11]. Typical colony size is 25 pairs [1]. Egg-laying and incubation generally begins in mid-May, and pairs may renest following loss of their first clutch [12]. Nests are simple scrapes made on non-vegetated substrates, usually consisting of one to three eggs, and are incubated for 19-25 days by both parents [1;10 cited from 11;13 cited from 4]. Chicks are mobile and leave the nest at only two days after hatching, the semi-precocial young are tended by both parents, and first flight happens at approximately 20 days after hatching [10 cited from 11;13 cited from 4]. Usually start breeding in their third year, but it is not uncommon to start in their second year. Can re-nest up to two times if eggs or chicks are lost early in the breeding season [1;12]. Usually nests in same area in successsive years; tends to return to natal site to nest [14]. Very gregarious and forage, roost, nest and migrate in colonies [1]. A long-lived species and banded birds have been recovered after 24 years [4].

Threats to tern colonies include predation, human disturbance, and nonnative plants. Other threats to terns are food shortage and environmental contamination [1].