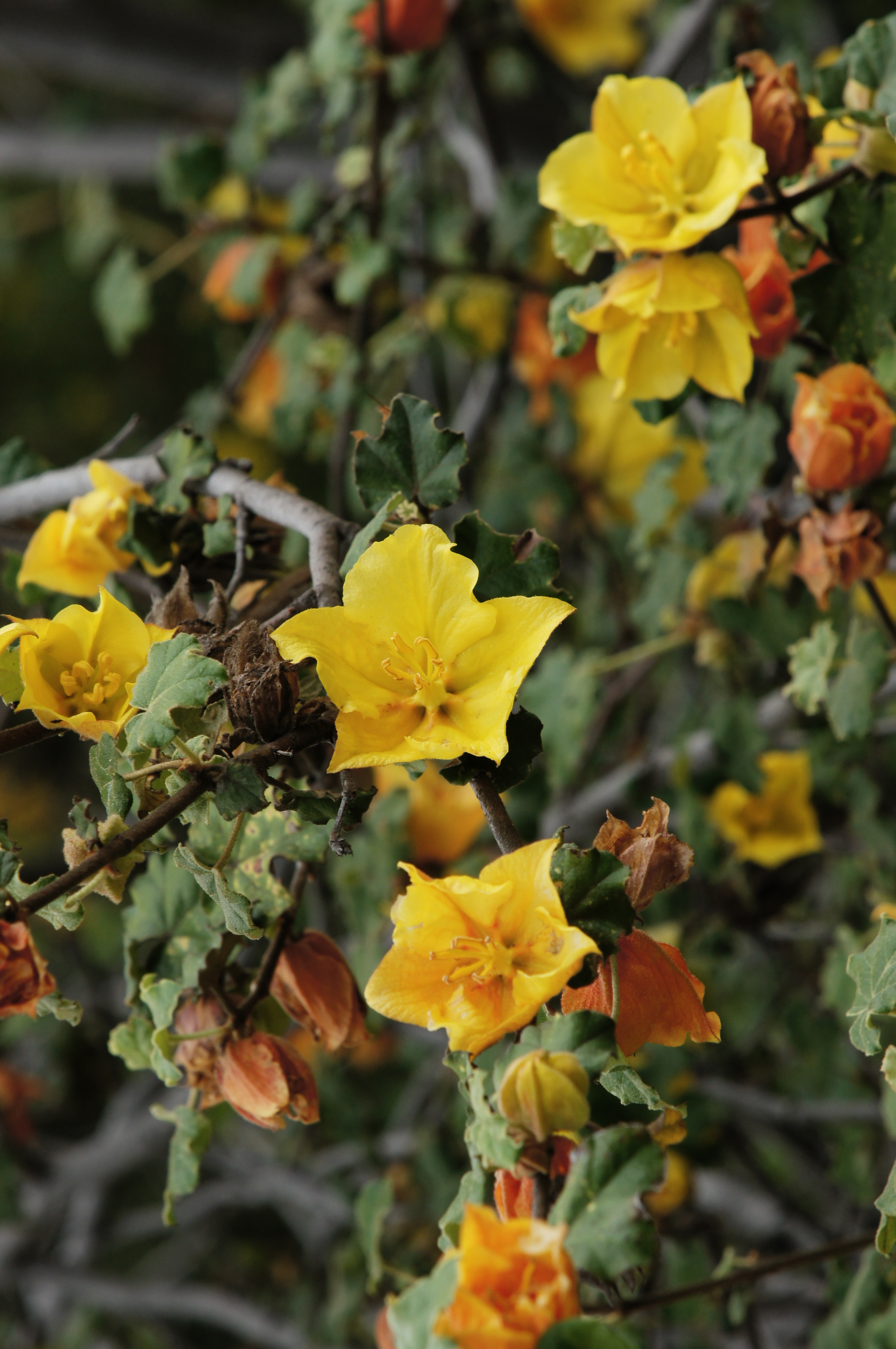 In 2017, inspect Mexican flannelbush occurrences on Conserved Lands (see occurrence table) using the regional IMG monitoring protocol to estimate abundance and collect covariate data on tamarisk and other types of threats, determine management needs. After 2017, repeat monitoring every 3 years, unless an occurrence is small (<100 individuals) or faces a high degree of threat, in which case monitor annually.

Beginning in 2017, continue routine management actions identified through the IMG monitoring that began in 2014 at Mexican flannelbush occurrences on Conserved Lands (see occurrence table) . Depending on the type and level of threat, management should only be conducted as needed, not necessarily every year, and using BMPs with precautions to do no harm.

Endemic to southern California and northwestern Baja California, Mexico [1]. In the US found only on the northwest side of Otay Mountain in southern San Diego County. Known to occur naturally in 3 canyons in the US and 1 canyon in Baja California.

Native populations occur in intermittent drainages with closed-cone coniferous forest and southern mixed chaparral habitats [1]. Often grows in association with metavolcanic soils [3, 4; both cited in 1]. Grows on alluvial benches associated with ephemeral drainages and also on the associated canyon slopes [1]. Elevation range is from sea level to 1,000 meters.

Perennial evergreen shrub [2] that flowers and produces seed each year [1]. Ability to survive fires through 2 strategies: 1) regenerates after fire through sprouts from underground roots and shoots not killed during the fire, and 2) new plants emerge from seeds that germinate following fire.

Flowers from March to June [8; cited in 1]. Seeds are held on the plants in dry pods until the fall and winter months when the capsules open to release seeds [1].

Showy nature of the flower and presence of nectar pits at the base of the sepals suggest insect pollination [1]. A focused pollination study has not been conducted.

Adverse genetic effects because of the low number of individuals in the Cedar Canyon occurrence, and altered fire regimes—fires that occur at shorter or longer intervals than the natural cycle or fires that may occur during reproductive seasons. Nonnative, invasive plants, including Tamarix sp. (tamarisk or salt cedar) [1]. There is also the potential for impacts to this species’ habitat from border patrol activities conducted by the Department of Homeland Security through road construction and vehicle use.

United States Fish and Wildlife Service Preventing Extinction Grant: A 2006 grant awarded to the San Diego National Wildlife Refuge to fund a project entitled “Distributional Enhancement of Mexican flannelbush” [1]. Five potential areas for introduction were identified on San Diego National Wildlife Refuge and BLM lands in the Jamul Mountains and on Mount McGinty. Refuge staff collected seeds from the Cedar Canyon population in 2007 and planted 19 plants grown from the collected seed at a site on the Refuge in 2009. Contact: John Martin, Wildlife Biologist, San Diego National Wildlife Refuge. Bureau of Land Management Challenge Cost Share Project: In 2007, the BLM began work on a Cost Share Project with researchers from San Diego State University to conduct a habitat site assessment based on the 2007 critical habitat designation. This research will enable BLM to develop appropriate management and monitoring programs in the areas that have occurrences or potential habitat. Principle investigator: is Kathy Williams, Ph.D., Associate Professor of Biology, San Diego State University. USFWS Recommendations: Resurvey historical occurrences and survey potential habitat to determine if there are any other extant native occurrences. Determine the breeding system and pollinators to determine what, if any, bottlenecks in reproductive output are due to these factors. Determine the distribution of genetic diversity at the various occurrences to assist in identifying higher priority occurrences for potential translocation source materials. Identify how the species will adapt to future environmental changes and withstand possible catastrophic events. Establish site and species monitoring protocols to identify how this species is impacted by future fires and how the occurrences will regenerate. This will help determine what management actions are appropriate. Support and provide assistance to the San Diego National Wildlife Refuge in their efforts to introduce new populations to suitable unoccupied habitat. Establish a working group that will coordinate conservation efforts for the species and focus on coordination between federal agencies (e.g., Service, BLM, DHS), MSCP staff (e.g., County of San Diego), Otay Ranch, and Mexico.

[3] Oberbauer, T. A. 1991. “Unique Soils and Plants of Limited Distribution in the Peninsular Ranges.” Written for Southern California Botanists.