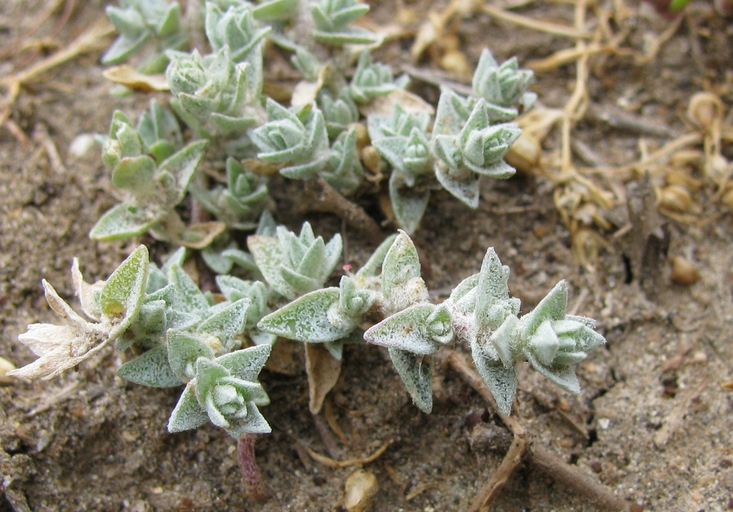 Goal: Maintain, enhance and restore alkali playa vegetation communities on Conserved Lands in the MSPA that supports or has the potential to support VF species (i.e., Coulter's saltbush, Parish's brittlescale, southern tarplant) so that the vegetation community has high ecological integrity, and these species are resilient to environmental stochasticity, catastrophic disturbances and threats, such as very large wildfires, invasive plants and prolonged drought, and will be likely to persist over the long term (>100 years).

Southern California and is thought to occur in Baja California, Mexico, but historic populations are unconfirmed [1, 2]. Was considered to be extinct until rediscovered in Hemet California, Riverside County in 1993 [3]. In 2001 it was rediscovered in the Ramona Grassland Preserve just outside the City of Ramona [4]. This species is currently known from 14 occurrences [4].

A few populations near Elfin Forest and a few localities in Ramona [4]. Within the MSPA in MU5: a few small populations in the Ramona Grassland Preserve and is associated with a small number of vernal pools on Cagney Ranch (The Nature Conservancy property) and MU6: between the cities of Olivenhain and Elfin Forest [5].

Amaranthaceae family (formerly in the Chenopodiaceae) [7]. Historically was considered most closely related to A. subtilis, A. miniscula, and A. depressa of the Central Valley however, these forms were separated based on differences in stature, leaf, and bract shape in 1993. Chromosome number is 2n=18. Taxonomic reevaluation indicates this species is only from southern California.

Flowers from June to October [1]. The reddish-brown seeds are about 1 to 2 mm long, encased in a diamond shaped fruiting bract which is fused near the tip [7].

The genus Atriplex is most likely wind pollinated but can also self-pollinate (cleistogomy) under certain conditions [9]. Seeds are thought to be dispersed by wind [10]. More detailed information is needed to understand the pollination and dispersal for this species.

Threatened by habitat destruction and fragmentation from urban and agricultural development, alteration of hydrology and floodplain dynamics including excessive flooding and channelization, off-road vehicle activity, trampling by cattle and sheep, weed abatement and fire suppression practices (including discing and plowing), and competition from non-native plant species [6,11].

Parish's brittlescale is declining throughout its range. It has a patchy distribution within this habitat and its spatial distribution shifts over time as conditions and seed banks change [12]. There is a considerable variability in population size from year to year depending upon rainfall and local flooding and therefore, may not be detectable every year [12]. It’s likely that this species requires significantly more habitat than is occupied during any one season to maintain population dynamics within the watershed and the microhabitat conditions which this taxon depends [11]. Parish’s brittlescale is small, easily overlooked, and its habitat is often mistaken for being highly disturbed late in the dry season [6]. Much of the remaining suitable habitat for this species has been impacted by discing for fuel modification and dry land farming activities [3,4].

[4] Calflora: Information on California Plant for Education, Research and Conservation, with Data Contributed by Public and Private Institutions and Individuals, including the Consortium of California Herbaria. 2016. Berkeley, CA: The Calflora Database. Available: http://www.calflora.org/. Accessed: November 7, 2016.