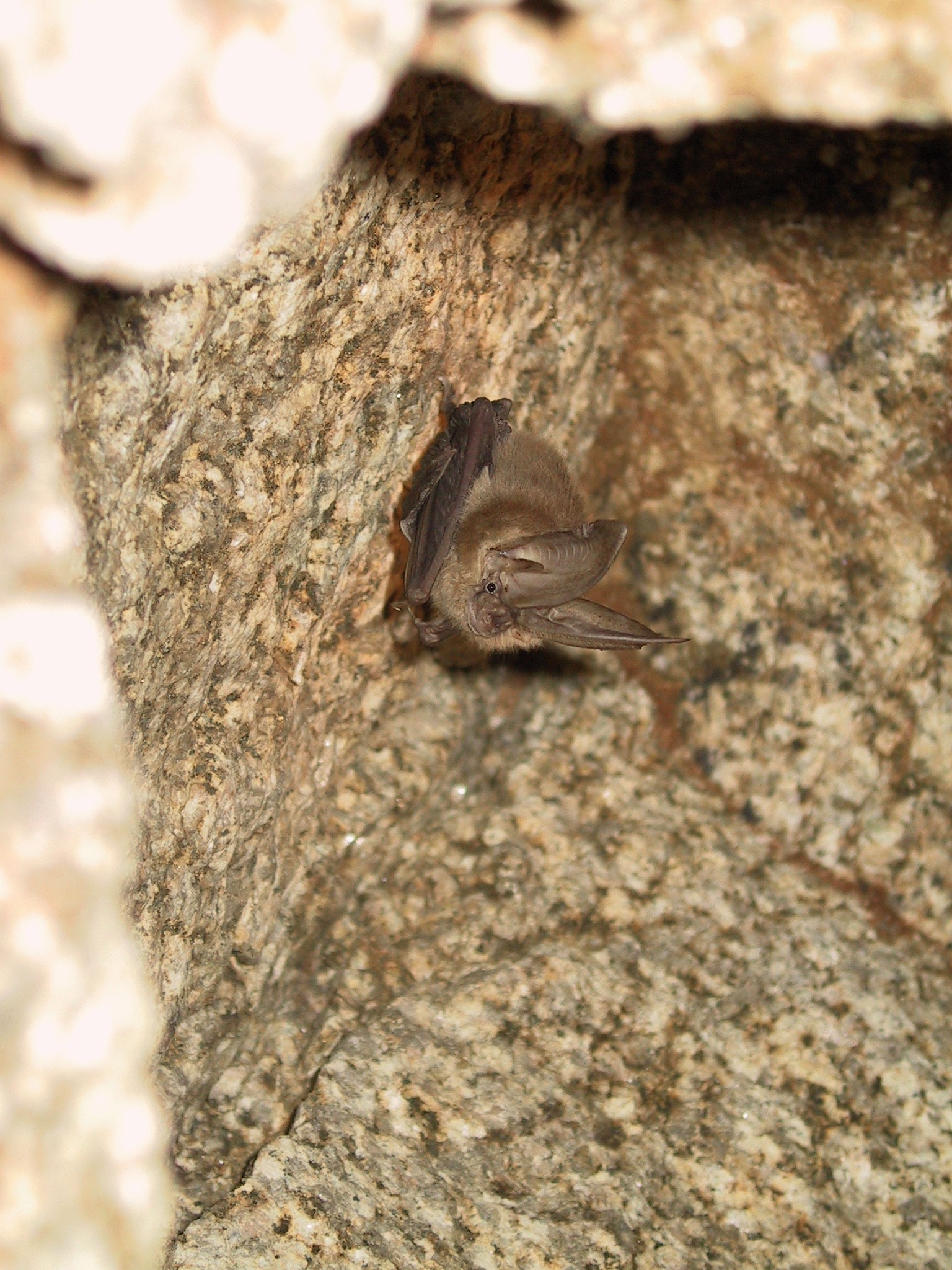 In 2017-2018, finalize the results of research begun in 2015 on Townsend's big-eared bat to identify nocturnal, diurnal, and maternity roosts, foraging areas, and water sources associated with roosts in order to identify seasonal and annual changes in use and important foraging areas and monitor reproductive status. Collect habitat covariates associated with roosting and foraging habitat and assess threats to bats at all preserves where they occur and develop management recommendations.

Beginning in 2017, annually inspect the vicinity of Townsend's big-eared bat roosts on an annual basis (see Table of Occurrences), taking care not to disturb bats, and use a regional monitoring protocol to collect covariate data on human activities and other threats to determine management needs.

Beginning in 2017, perform routine management activities such as protecting occurrences from disturbance through fencing, signage, and enforcement.

Beginning in 2020, monitor the effectiveness of management actions implemented for Townsend's big-eared bats on Conserved Lands

Occurs primarily in the western-most portion of the species' range in California, Oregon, Washington, Nevada, Idaho with more occurrences in Arizona, Colorado, New Mexico, Texas, and Wyoming [1;2; both from 3]. There are extensive zones of intergradation with the other subspecies, C. t. townsendii, throughout much of its range in California, Nevada, Idaho, Oregon and Washington [3;1 cited from 4;5] with C. t. townsendii also occurring in possibly southwestern Montana and northwestern Utah [3]. Patchy distribution strongly correlated with the availability of caves and cave‐like roosting habitat, degree of human disturbance at roosts, and population centers occur in areas dominated by exposed, cavity forming rock and/or historic mining districts [3;4;5;7].

SSC; Currently in evaluation process for State listing of Threatened and/or Endangered

Species is found from inland deserts to the cool, moist coastal redwood forests, in oak woodlands of the inner Coast Ranges and Sierra Nevada foothills, and lower to mid‐elevation mixed coniferous‐deciduous forests [3;4;6;7]. Has been reported in a wide variety of habitat types ranging from sea level to 3,300 meters. For roosts and hibernicula, prefers open surfaces of caves or cave‐like structures, such as subsurface hard rock mines, and large undisturbed spaces in buildings, bridges, and water diversion tunnels [6]. Though roost availability may be low in California Coastal regions, roost fidelity may be quite high [8]. Most commonly found in abandoned mines in San Diego County and appears to be located wherever there are historic mining districts, including within the MSCP area [7].

In the Microchiropteran bat family Vespertillionidae [3;6]. California has two subspecies of Corynorhinus townsendii (C. t. townsendii and C. t. pallescens), as defined in the last taxonomic revision of the species [1 cited from 4].

A late flyer, emerging an average of 46 minutes after sunset [9]. A study suggested 2 peaks of activity during the night. Another study showed that during lactation, females returned to the nursery roost up to 3 times per night, but after lactation remained away from the roost all night [5].

Colonial species. Maternity colonies form between March and June (based on local climate and latitude). Colonies typically range from a few dozen to several hundred individuals, with colonies of over 1,000 documented [3;6]. Most mating generally takes place in migratory sites and hibernacula between September/October and February, but many females are inseminated before hibernation begins [6;10]. Sperm is stored until ovulation occurs in spring. Gestation lasts 56-100 days, depending on temperature, size of the hibernating cluster, and time in hibernation. A single litter of 1 is produced annually, occurring between May and July [3;6]. Young are weaned in 6 weeks and fly 2.5-3 weeks after birth. Growth rate depends on temperature. Maternity group begins to break up in August. Females mate in their first autumn, males in their first or second autumn. About half of young females return to their birth site after their first hibernation. Subsequent return rates are 70-80%. A longevity record of more than 21 years has been reported and annual survival has been estimated at about 50% for young, and about 80% for adults [6].

Foraging associations include edge habitats along streams and adjacent to and within a variety of wooded habitats. Tend to follow densely vegetated gullies when dispersing from the main roost, and spend the majority of their foraging time within a forested habitat [6;11]. Likely a Lepidopteran specialist, feeding primarily on both small and medium‐sized moths [6;7;10]. Beetles and a variety of soft-bodied insects also are taken. Captures prey in flight using echolocation or by gleaning from foliage. Flight is slow and maneuverable. Capable of hovering. Forages with many other species [10].

[1] Handley, C.O. 1959. A revision of American bats of the genera Euderma and Plecotus. Smithsonian Institution.

[3] California Department of Fish and Wildlife. 2016. A Status Review of Townsend's Big-Eared Bat (Corynorhinus townsendii) in California. Report to the Fish and Game Commission.

[6] California Department of Fish and Wildlife. 2013. Evaluation of the Petition from the Center of Biological Diversity to List Townsend's Big-Eared Bat(Corynorhinus townsendii) as Threatened or Endangered Under the California Endangered Species Act.