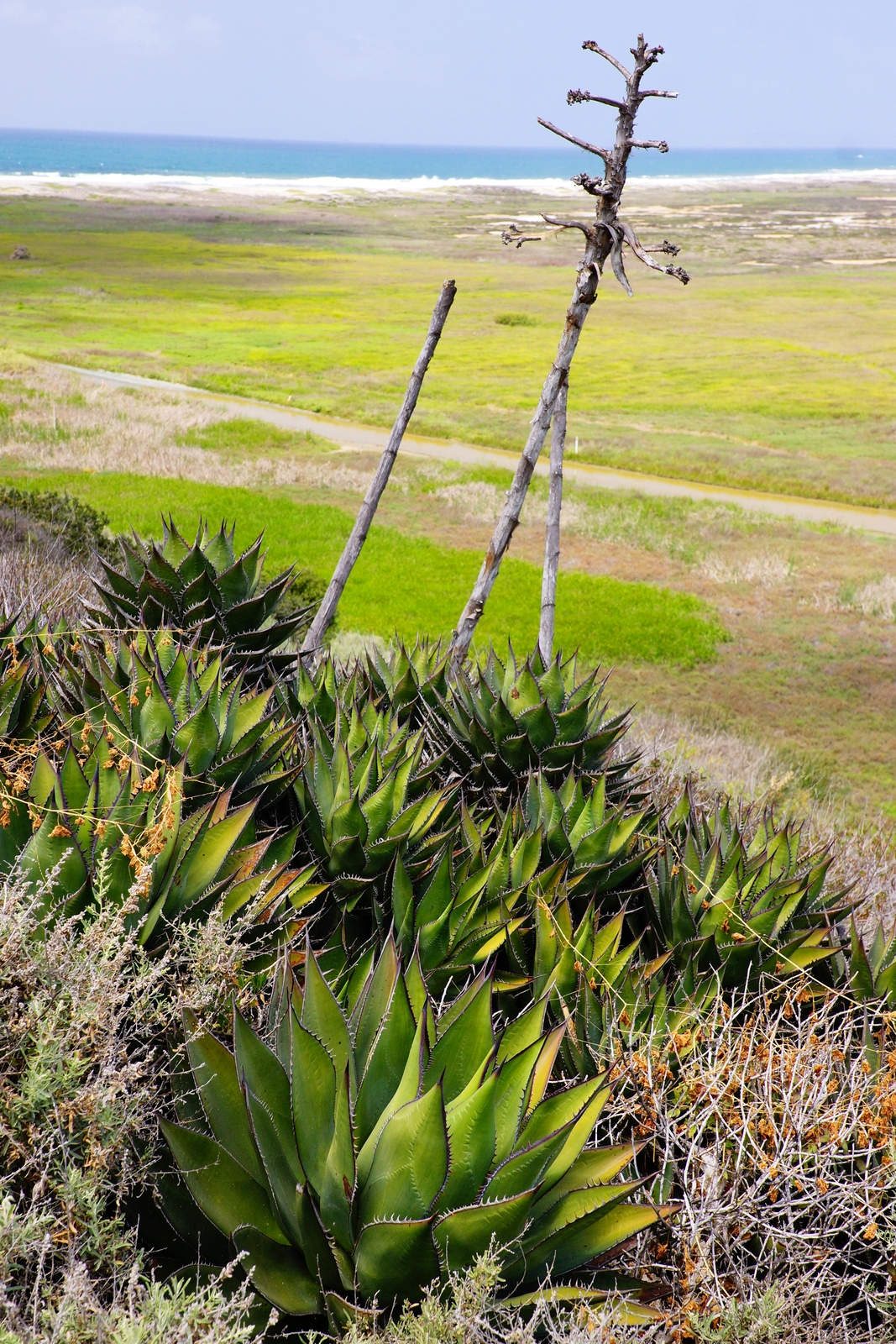 Beginning in 2017, conduct routine management actions as identified through the IMG monitoring conducted in 2016 and 2021 at Shaw's agave occurrences on Conserved Lands (see occurrence table). Depending on the type and level of threat, management should be conducted as needed, not necessarily every year, and using BMPs with precautions to do no harm.

Native range restricted to a single natural occurrence in San Diego County at Border Field State Park in MU1 [1]. A second occurrence of partially native origin is found on the Point Loma Naval Base in MU1. There are 4 other transplanted occurrences in MUs 1 and 7.

Restricted distribution, occurring only in maritime succulent scrub near coast [1]. Mean annual rainfall where found in California is 423 mm, falling mostly between October and April [3]. Mean annual maximum and minimum temperatures are 19 C and 13 C, respectively. Moderately cold sensitive, with damage starting at -5 degrees C and becoming extensive at -8 degrees C [4; cited in 1].

Perennial monocot in Agavaceae family [1]. The only natural occurrence in San Diego County was restricted to one genetic individual during the construction of the border fence. Chromosome number is 2n = 60 [5; cited in 1]. Low seedling recruitment and low viable seed production may impact genetic diversity [1].

A large shrub-like rosette-forming perennial monocot [1]. Occurrences differ considerably in growth form. Some consist entirely of individual rosettes, while others form groups of clones via suckering, or “budding” from the roots. Average age to flowering is 20-40 years [6]. Low proportion of reproductive individuals in the US in any given year is a factor of the minimal sexual reproduction and low seed set [1].

Flowers from February to May in California (as early as November in Baja California), but may take decades to do so. Monocarpic rosettes that die after flowering [1].

Capable of reproducing by suckering, but occurrences vary considerably with some consisting entirely of individual unbranched rosettes and others consisting of clumps or colonies of clones [1]. Sexual reproduction and seedling recruitment are low throughout its range. Belief that Shaw's agave may be shifting from an ancestral habit of bat-pollinated toward pollination by bees or other diurnal pollinators due to selection pressures [7]. Large bees and hummingbirds are probable pollinators as they are often seen visiting flowers, but empirical data to substantiate these claims are lacking [1]. Fruits and inflorescence stalks are persistent and seeds are shaken from the tall dry inflorescences by wind or other forces. Seedling recruitment in California occurrences is visibly low and viable seed production appears to be low in recent years for all occurrences. It is not documented whether this taxon is self-compatible and can set seed without pollen from another individual or genotype. Data is also lacking on compatibility between clone rosettes. Distances between occurrences are considerable in the northern range and may be impacting effective cross-pollination.

Physical loss of plants and habitat through human interference [1]. Unrestricted collecting and habitat alteration have significantly reduced occurrences and numbers [8]. Nonnative plant species may be negatively impacting seedling recruitment [Jon Rebman, pers. comm. 2007; cited in 1]. May be due to impacts of nonnative species on the local environment or to direct competition for resources. Depletion of unique genotypes may be the biggest threat to the long-term survival of this species [9].

Does well in cultivation, and is easily propagated clonally, with many rosettes surviving transplanting at reintroduction sites [10]. Recommendations for conserving Shaw's agave include: development of a binational conservation plan (and consideration of endangered species listing in both nations); implementing a monitoring program with standardized protocols; maintaining an ex­-situ conservation seed collection; research into the causes of limited seed set and low seedling recruitment; a laboratory study on the genetic variation between all California and Baja California occurrences; an assessment of the genetic distance between Shaw's agave and its sister subspecies to the south; a survey of zones of potential interspecific hybridization; assessing occurrences in northern Baja California for long-term conservation; and developing a long-term cross-border conservation initiative [1].