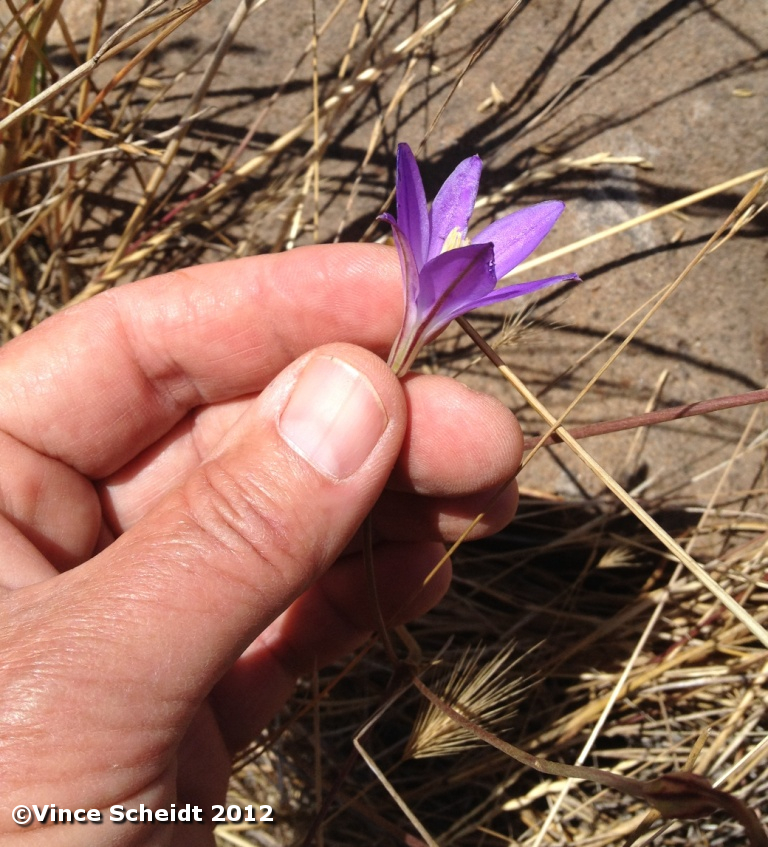 Beginning in 2019, conduct routine management actions as identified through the IMG monitoring in 2018 at Santa Rosa brodiaea occurrences on Conserved Lands (see occurrence table). Depending on the type and level of threat, management should be conducted as needed, not necessarily every year, and using BMPs with precautions to do no harm.

Occurs only on or very close to the 8–11 million-year-old Santa Rosa Basalt [1]. Grows in many habitats, including next to vernal pools, but can also grow in drier locations. Can grow in disturbed areas, disturbed soils, on top of the water pipes, and in roadside berms. Elevation range 565-1045 meters [2].

New species of Brodiaea previously collected by at least six different botanists and variously determined as B. orcuttii (E. Greene) Baker, B. filifolia (S. Watson), or a hybrid between the two [1]. Analysis distinguished it from B. filifolia and B. orcuttii by at least 11 separate characteristics. In the Themidaceae family [2].

Often reproduce by corms with populations in small areas often being clonal [1].

There appears to be low threat from humans [1] with possible threats from development [2]. Long-term threat is the erosion of the Santa Rosa Basalt and loss of native habitat [1]. Forms sterile hybrids with B. terrestris ssp. kernensis [2].

Appears to exist stably with the abundant nonnative grasses that are found at a few of the sites [1]. Four of the known populations are protected as part of the Santa Rosa Plateau Ecological Reserve and Cleveland National Forest. The large population on Avenaloca Mesa is partially protected by the Nature Conservancy.