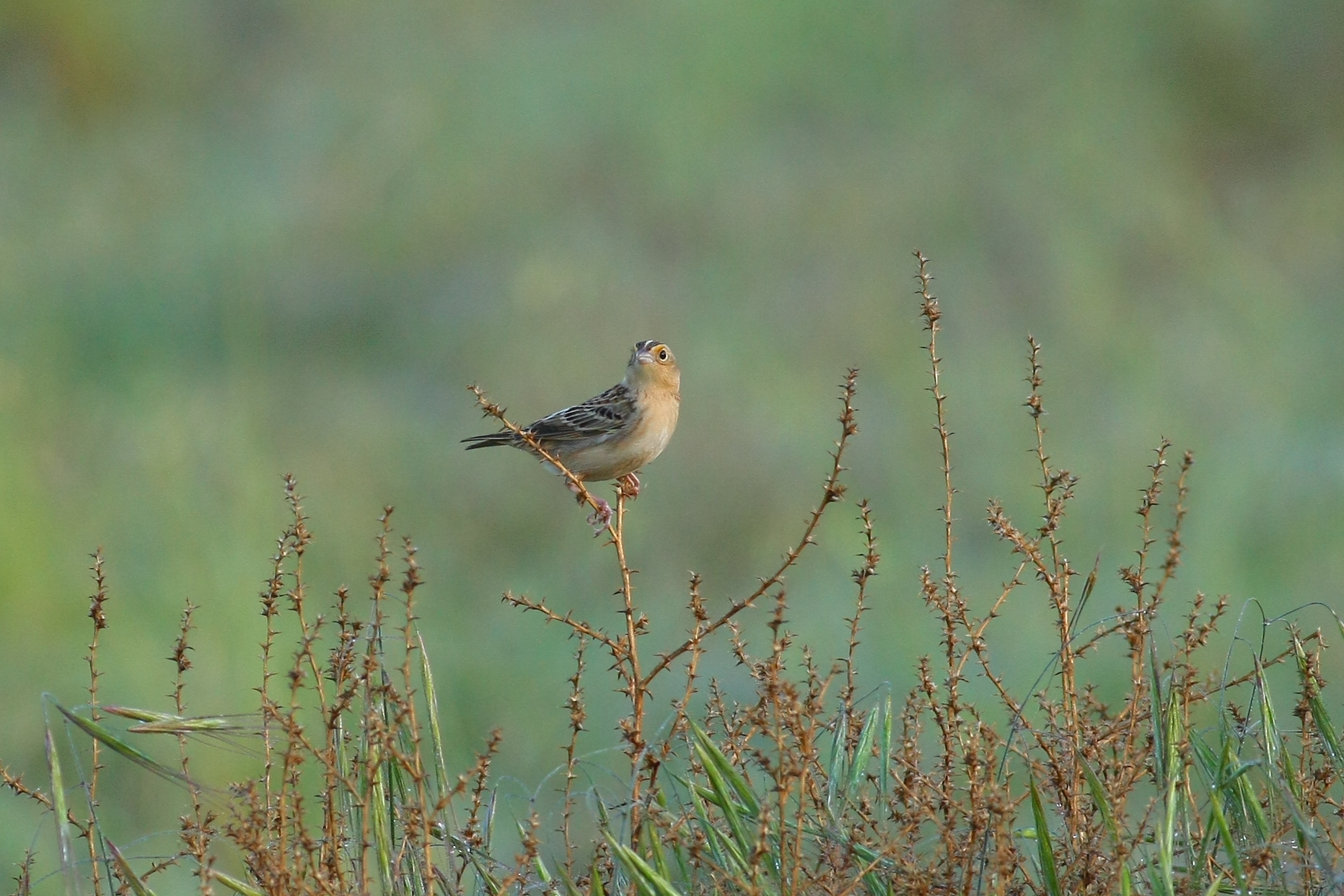 Most populations of grasshopper sparrows are migratory, wintering from the coastal plains of Virginia south throughout Florida, Gulf of Mexico, southern portions of Texas, Arizona, and California where the states border Mexico and Central America [1]. Breeds in appropriate grassland habitats throughout most of the continental United States and southern portions of Canada.

Prefer open grasslands with areas of bare ground for detecting prey and foraging [1]. In California, individuals tend to be found in arid grasslands and prairies with shrub cover and more vegetation. Scattered shrubs are desired for perching. During migration and winter months the sparrow will use various types of open fields [1].

There are a total of twelve subspecies of grasshopper sparrows in the Americas, four of the subspecies are located in North America [1]. The subspecies Ammodramus savannarum perpallidus, is the western form in California [1].

Secretive in nature, the grasshopper sparrow is rarely seen outside of the breeding season [4]. Individuals are diurnally active, but often overlooked as they prefer to run along the ground between vegetation instead of flying [5]. During migration, the sparrows have been observed to move in smaller, mixed flocks at night [1]. Males are the first to arrive on breeding grounds in late February to early March and generally migrate south in late August or September [4, 6].

Males arrive on the breeding grounds a few days before females and perch to defend their territories and search for a mate. Pair bonds are usually monogamous, but polygyny is not unheard of [1]. Females build nests that are well hidden on the ground inside depressions so the rim of the nest is flush with the ground. A new nest is built for each brood, typically 2 per year. Females lay on average 4-5 eggs and incubate them for 11-13 days. Young leave the nest at approximately a week old and instead of flying will run when they leave the nest. Both parents help feed the young, who leave the nest after 8-9 days. Young are not able to fly yet once they leave the nest and parents will continue to provide care for an additional 4-19 days [1].

Grasshopper sparrows eat insects and seeds, but proportions between the two vary seasonally, consisting of mainly seeds during winter and fall and insects in the spring and summer [7]. Requires open areas and bare ground for good visibility in detecting prey. Prefers to eat grasshoppers, but will also eat other insects and spiders.

Overgrazing, groundwater pumping, invasion of exotic plants, conversion to agriculture, and urban sprawl has diminished and degraded most of the native grassland habitats suitable for grasshopper sparrows [2].