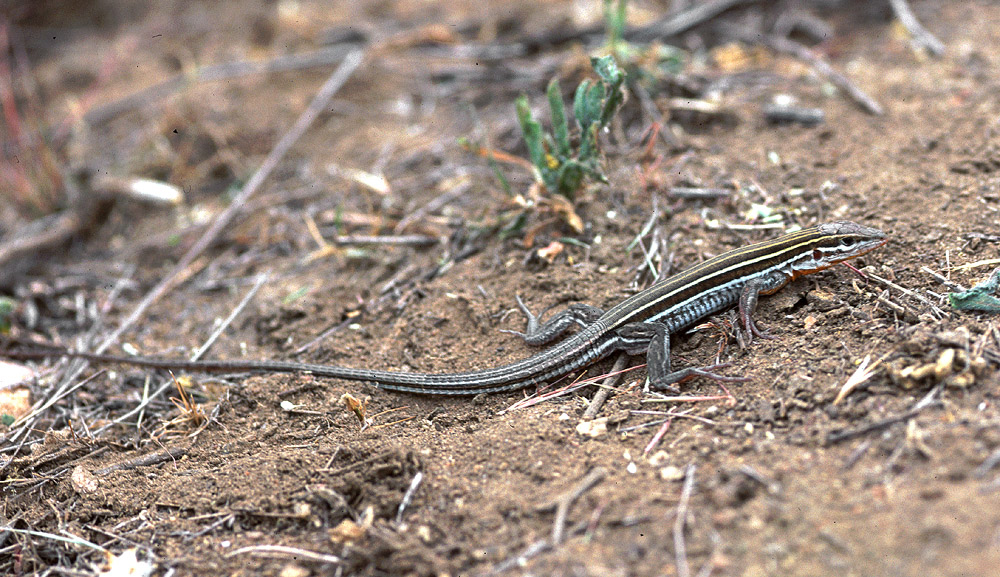 Ranges from the southern edges of Orange and San Bernardino Counties, the Corona-Riverside-Colton areas of Riverside County southward through the Elsinore and Perris Basins, and through coastal and low-elevational areas of San Diego County [1]. Can be found on the coastal slope of the Peninsular Ranges-and extends from near sea level to 1040 m (northeast of Aguanga, Riverside County) [2].

Occurs primarily on coarse soils in open coastal sage scrub vegetation [3, cited in 1]. Also inhabits chamise-redshank chaparral, mixed chaparral, and valley-foothill hardwood habitats [4]. Associated with the presence of some perennial plants such as buckwheat (Erigonum fasciculatum), low, open chamise (Adenostoma fasciculatum), and white sage and black sage (Salvia apiana and S. mellifera) [1] due to its food source, termites [5], and its necessary requirement of a perennial plant as a food base [6, cited in 2]. Occurs along the edge of open, dry, riparian areas, along trails, along dirt roads, and in areas of light off-road vehicle use [1].

This taxon is morphologically distinct [7] and has never been confused with any other taxon [2].

Breeding season lasts from May through mid-July [10;11]. Sexually maturity reached in 1 year, but most individuals, especially females, require 2 years to become sexually mature [12]. Females deposit two or three moderate-sized, leathery-shelled eggs in June or July in an unknown location. Mean clutch is small (2.3 eggs). Incubation lasts from 50 to 55 days [10]. Hatchlings emerge from August through October [1]. Longevity is unknown [2].

Feeds primarily on termites [5]. Will feed on other insects such as spiders, beetles, and grasshoppers during the late summer [6, cited in 2]. Forages actively on the surface and scratches through surface debris [4]. Regularly stops movement momentarily to probe for food within leaf litter, shallow burrows, and loose soil [9].

Threatened mainly due to habitat loss [1]. A considerable amount of its habitat has been destroyed and fragmented by urban and agricultural development in southern California [2].

[1] Brattstrom, B. H. 2000. The Range, Habitat Requirements, and Abundance of the Orange-throated Whiptail, Cnemidophorus hyperythrus beldingi. Bulletin of the Southern California Academy of Sciences 99(1): 1-24.

[9] Grismer, L. L. 2002. Amphibians and Reptiles of Baja California, including its Pacific Islands and the Islands in the Sea of Cortes.University of California Press.