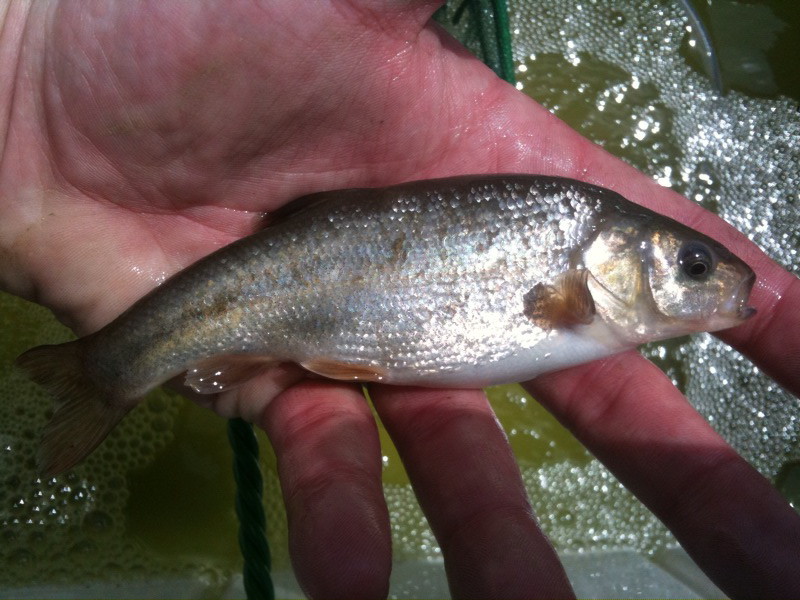 Found in slow-moving or backwater sections of warm to cool (10-24°C) streams with mud or sand substrates [2]. Does best in lower gradient streams that have largely disappeared [3]. Depths are typically greater than 40 cm [2]. Physiologically adapted to hypoxic conditions and wide temperature fluctuations, conditions common in southern coastal streams [6].

Spawn primarily in June and July, however can breed continously from February through August [10 cited from 2,11, and 12].

Occurs in pools or in quiet edge water at 14 to 22 degrees Celcius. Egg release initiated by the rubbing of the male's snout to the area below the female's pelvic fins. More than one male may fertilize the eggs as they are being laid [10 cited from 2 and 12]. Embryos adhere to plants, rocks, and debris and hatch in 4 days at 24 degrees Celcius. After hatching, fry remain attached to or in the substrate for several days and swim to the surface, presumably to fill the swimbladder, once the yolk sac is absorbed [10 cited from 2 and 11]. Females can begin reproducing after one year. Females grow larger than males after second year. Life expectancy rarely more than 4 years [2;11;12].

True omnivores. Feed on algae, insects, and small crustaceans. Algae made up most (60-80%) of the identified stomach contents [13 cited from 11]. Also feed on roots of a floating water fern (Azolla), whih is generally infested with nematodes [8;5 cited from 14 and 2].

Natural dispersal is typically up- or downstream as conditions and suitable habitat permit. Typically facilitated by flooding events [5 cited from 12]. Dispersal within the mainstem of the Santa Margarita River appeared to increase dramatically after El Nino rains produced flood waters that heavily scoured the vegetation within the drainage, widening channels and reducing channel depths, creating habitat conditions that favor the chub and reduce exotic fish presence [15 cited from 12]. Larvae and juveniles tend to invade standing backwaters and/or disperse downstream from upstream spawning areas within the Santa Ana River [16 cited from 12]. Dispersal within both watersheds is currently limited by several large dams that serve as migration barriers. Many tributaries within each watershed are limited for chub occupation because of artificial or natural upstream migration barriers [15;16; both cited from 12].

[1] Wells, A. W., J. S. Diana, and C. C. Swift. 1975. Survey of the freshwater fishes and their habitats in the coastal drainages of southern California. Section of Ichthyology, Natural History Museum of Los Angeles County.