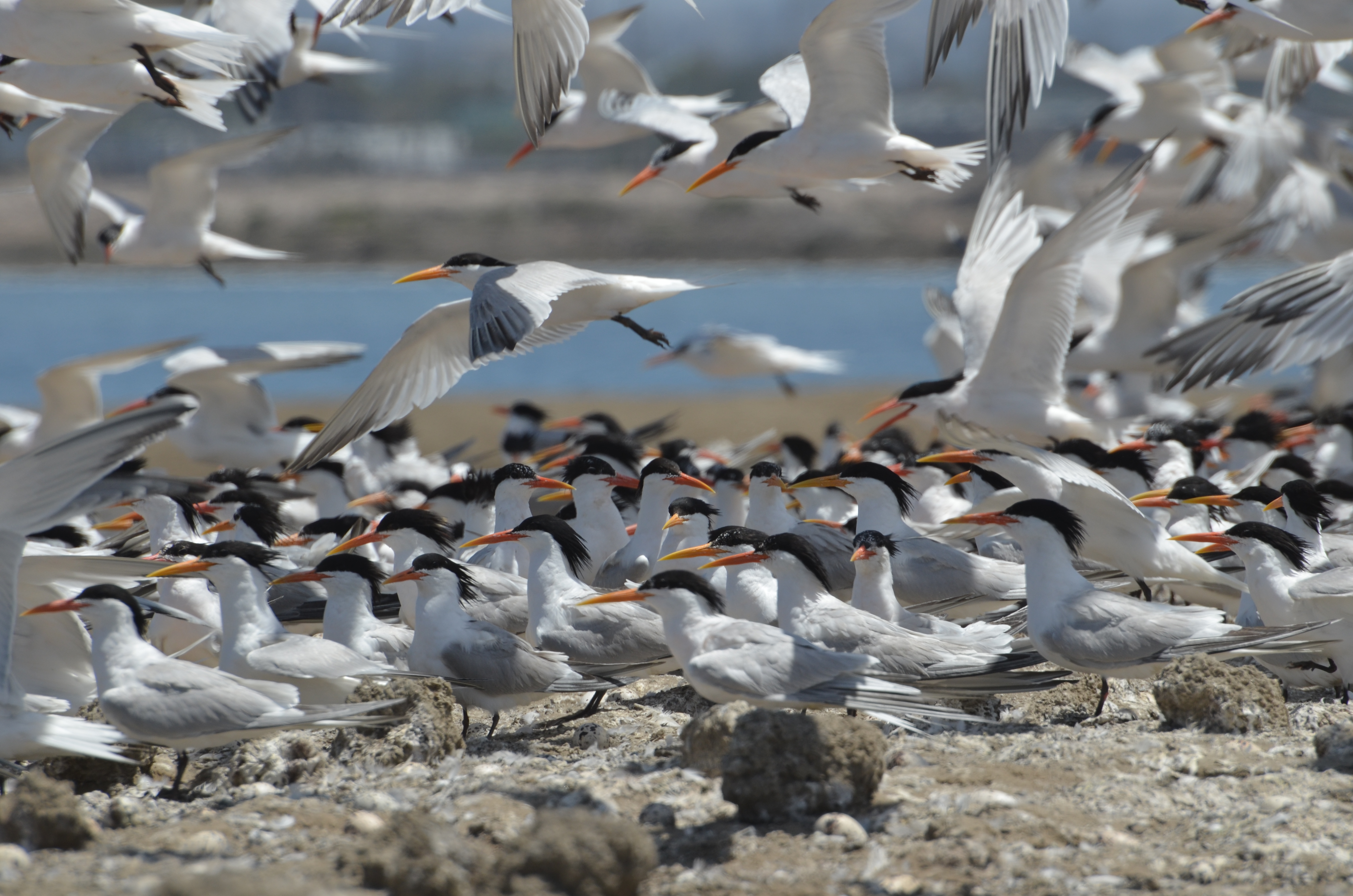 Breeds primarily in Mexico along the coast of Baja California and more prominently in the Gulf of California on Isla Rasa Island [1]. Populations have also been documented breeding along the coast of San Diego County and as far north as Los Angeles Harbor [1]. Will migrate north around the first week in October, rarely migrating north of Marin County.

Preferred habitats are inshore coastal waters, bays, estuaries, and harbors [3]. Rarely occurs far offshore, but will occasionally. Never occurs inland [3]. Breeds on low, flat, sandy islands [4]. Commonly congregates along beaches and tide flats when not feeding. Will usually avoid mingling with its own species when present.

Breeds from San Diego Bay south to central Baja California and most common on Isla Rasa located in the Gulf of California [7]. Post-breeders in summer occur regularly on the Pacific Coast from central California to Costa Rica. Frequents the coasts of Central and South America in winter [7].

Elegant terns will arrive to their nesting sites along San Diego Bay around the second week in March, much earlier than post-nesting visitors [3]. At San Diego Bay, typically nests on bare ground. Does not use same nest site from year to year [7].Will use debris such as twigs, bones, feathers, and clam and snail shells. From a distance individual nests are difficult to locate because feces splattered around them match substrate color [8].Clutch size is generally 1, but can be 2. Eggs are white to pink buff, marked with black or dark brown. Most eggs are laid in April. Incubation period is about 20-30 days and carried out by both parents [9].

Threats to tern colonies include predation, human disturbance, and urban development [10]. Other threats to terns are food shortage influenced by over-fishing and environmental contamination.

[6] Bridge, E. S., A. W. Jones and A. J. Baker. 2005a. A phylogenetic framework for the terns (Sternini) inferred from mtDNA sequences: Implications for taxonomy and plumage evolution. Molecular Phylogenetics and Evolution no. 35 (2):459-469.