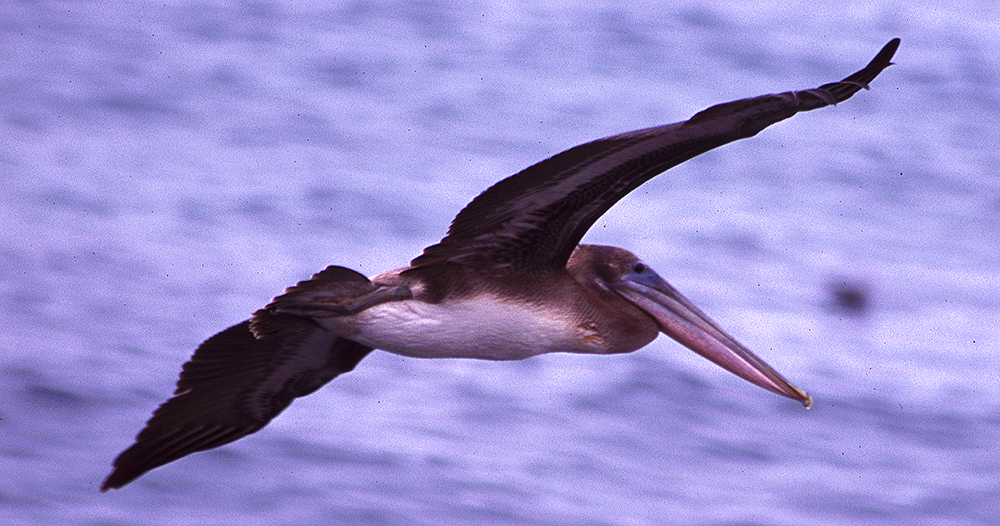 Found along the entire length of the California coast, primarily in estuaries, marine subtidal, and marine pelagic waters, as well as on offshore islands [1]. A permanent resident of the Pacific Coast marine environment, the pelican’s range extends from British Columbia south to Nayarit, Mexico.

Common along the entire coast of San Diego County during winter months. It has also been spotted flying over Sweetwater Reservoir, Lake Wohlford, and San Pasqual Valley [2]. During the breeding season from March until May, the pelican will migrate in clusters to offshore islands.

Delisted due to recovery [3].

Year-long, diurnal activity [6]. Once breeding concludes, around mid-May, individuals leave colonies in the Channel Islands and in Mexico, and disperse along the entire California coast. A small portion of the population will visit the Salton Sea and Colorado River reservoirs. Most return to breeding colonies by March or April.

Pelicans breed in nesting colonies preferably on off-shore islands without mammalian predators and with minimal human activity [1, 5]. Typically, pelicans will build a nest on the ground or on native shrubs, but also occasionally in trees. On off-shore islands Anacapa and Santa Barbara, brown pelicans generally nest on inaccessible slopes, canyons, and high bluff tops and edges. Breeding occurs from March to early August on the Channel Islands: Anacapa, Santa Barbara, and Santa Cruz. In southern California, pelicans are common along the coast from June to October, within 175 km (109 miles) [5]. Fairly common the rest of year, with lowest numbers occur April to May [1]. Eggs are laid between March and April, but can be laid as late as June [7]. Clutch size is 2- 3 eggs; single-brooded. Incubation can last up to 4 weeks. Young are altricial and tended by both parents. By week nine the young will usually begin to fly and are independent shortly after (week 13). Young will begin breeding by year 2-3.

Forages during early mornings, late afternoon, or when tides are rising [7]. Feeds almost entirely on fish, caught by diving. Can plunge from as high as 20 meters to catch prey. May completely, or only partially, submerge in deep or shallow water. Occasionally feeds on crustaceans, carrion, and young of its own species [7].During the breeding season, their diet consist of primarily northern anchovies and Pacific sardines, which can largely determine reproductive success. Stays close to shore and hunts for its food usually within five miles of land. Occasionally will feed by sitting on the surface of the water and scavenging for food [8].

Contamination of California coastal waters with DDT caused a regional decline in populations until the mid-1970s [9]. Once DDT was banned, the population began to recover. This species still faces threats especially due to the bird’s sensitivity during nesting. Nesting colonies must be protected from human disturbance and the release of predators.