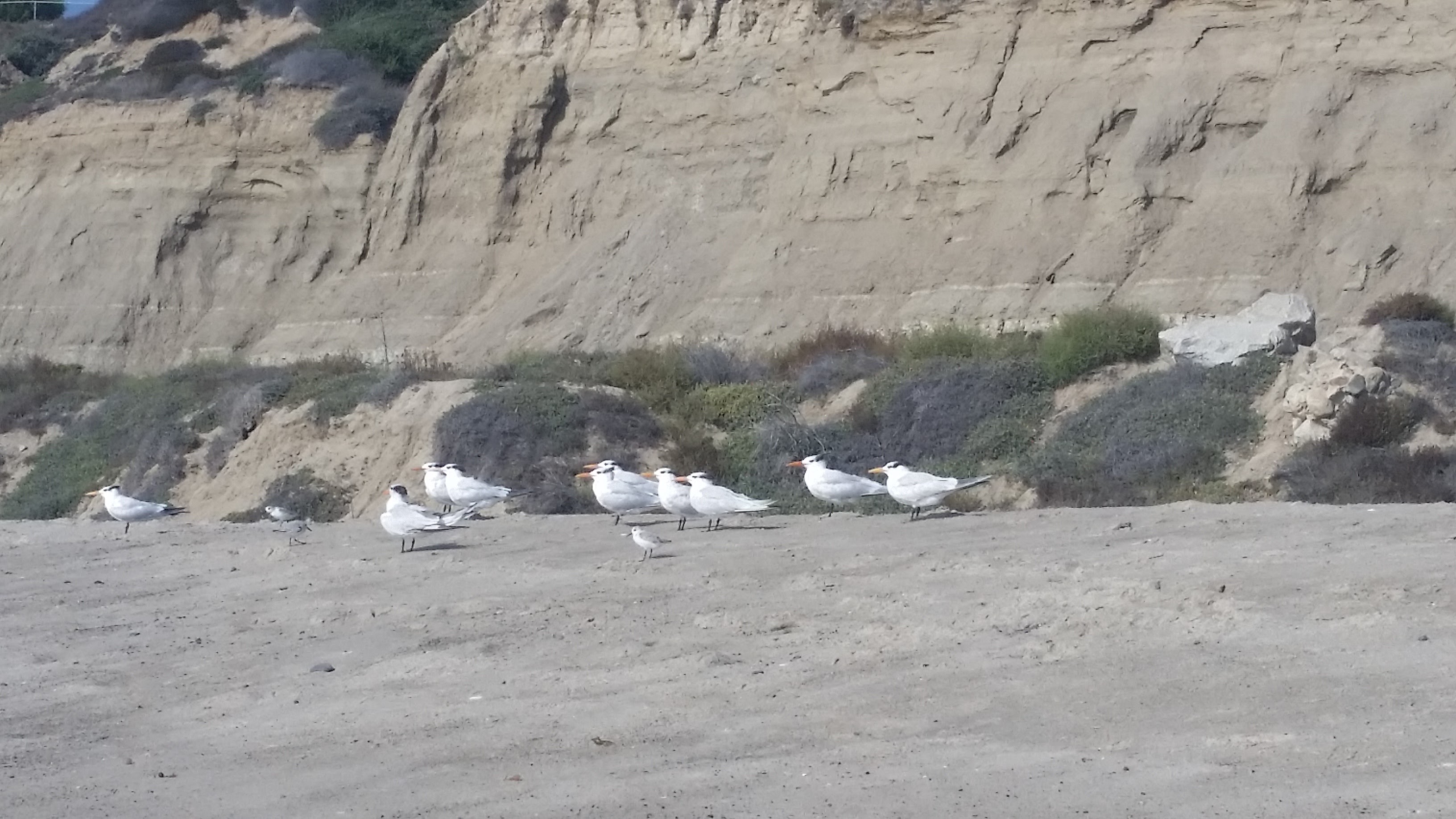 The two types of coastal dunes in San Diego are active coastal dunes and foredunes. Active coastal dunes occur on barren, mobile sand accumulations [1]. The size and shapes of these formations are determined by abiotic site factors such as, wind direction and speed, site topography, sand source, and grain size, rather than by stabilizing vegetation. Coastal dunes are unvegetated and will often overrun adjacent foredunes. Foredunes are similar to active coastal dunes, but with less wind and/or a smaller supply of sand and/or more available groundwater. Foredunes are drier, slightly warmer, and exposed to weaker and less persistent onshore winds. A coastal bluff is a naturally formed precipitous landform that generally has a gradient of at least 200 percent (1:2 slope) with a vertical elevation of at least 10 feet [2]. The southern coastal scrub vegetation community exists on coastal bluffs [1]. Southern California bluff scrub is a low growing scrub up to 2 meters tall. The scrub forms continuous mats or may be more scattered. The vegetation consists of dwarf shrubs, herbaceous perennials, and annuals.

Active coastal dunes are found along the Pacific Coast where sandy beaches are present and coastal headlands are absent [1].

The plants found on coastal sand dunes are primarily prostrate herbs with creeping stems and long taproots [4]. The leaves are typically small, somewhat succulent, and often hairy and grayish in color. These features aid the plants in tolerating drought, salt stress, and intense sunlight. The vegetation of foredunes is dominated by succulents, perennial herbs, and subshrubs [1]. The vegetation lacks perennial grasses, but has a higher proportion of subshrubs that grow up to 30 cm tall. Coverage varies from complete to scattered. Growth and flowering occur in early to mid-spring. Coastal bluff vegetation is exposed to varying, moisture-laden winds with high salt content. The soils on coastal bluffs are usually rocky and poorly developed.

Coastal dunes are dynamic habitats affected by waves, tides, wind, and trampling [4]. Dunes develop when there is a substantial amount of blown, dry sand. Coastal bluffs are escarpments or steep faces of rock, decomposed rock, or soil resulting from erosion, faulting, or folding of the land mass and are located in the coastal zone [2].

Coastal dunes in California have been significantly threatened and reduced by development, off road vehicle use, and exotic species invasion [4]. Human disturbance and competition for the use of beaches by beach-goers can endanger birds that rely on beaches for nesting habitat, such as the least tern (Sternula antillarum) and snowy plover (Charadrius nivosus) [5]. Coastal bluffs are threatened by the increasing pressure to develop shorelines, as well as a number of natural processes. High tides and large waves can contribute to cliff failure and can threaten the coastal scrub bluff vegetation community. Large waves facilitate coastal bluff erosion by removing protective beach sediment and allowing waves to directly attack the toe cliff [6]. Moderate-to high-intensity ENSO events can elevate sea levels and lead to high wave energy, which can cause sea-cliff erosion and shoreline recession. Problems from coastal bluff failures have emerged from Torrey Pines to San Onofre [7]. In March 2016 a large sea cave opened up beneath a Carlsbad bluff, and in August 2018 large chunks of the Del Mar cliffs collapsed, impacting train traffic and narrowly missing sunbathers below [8].