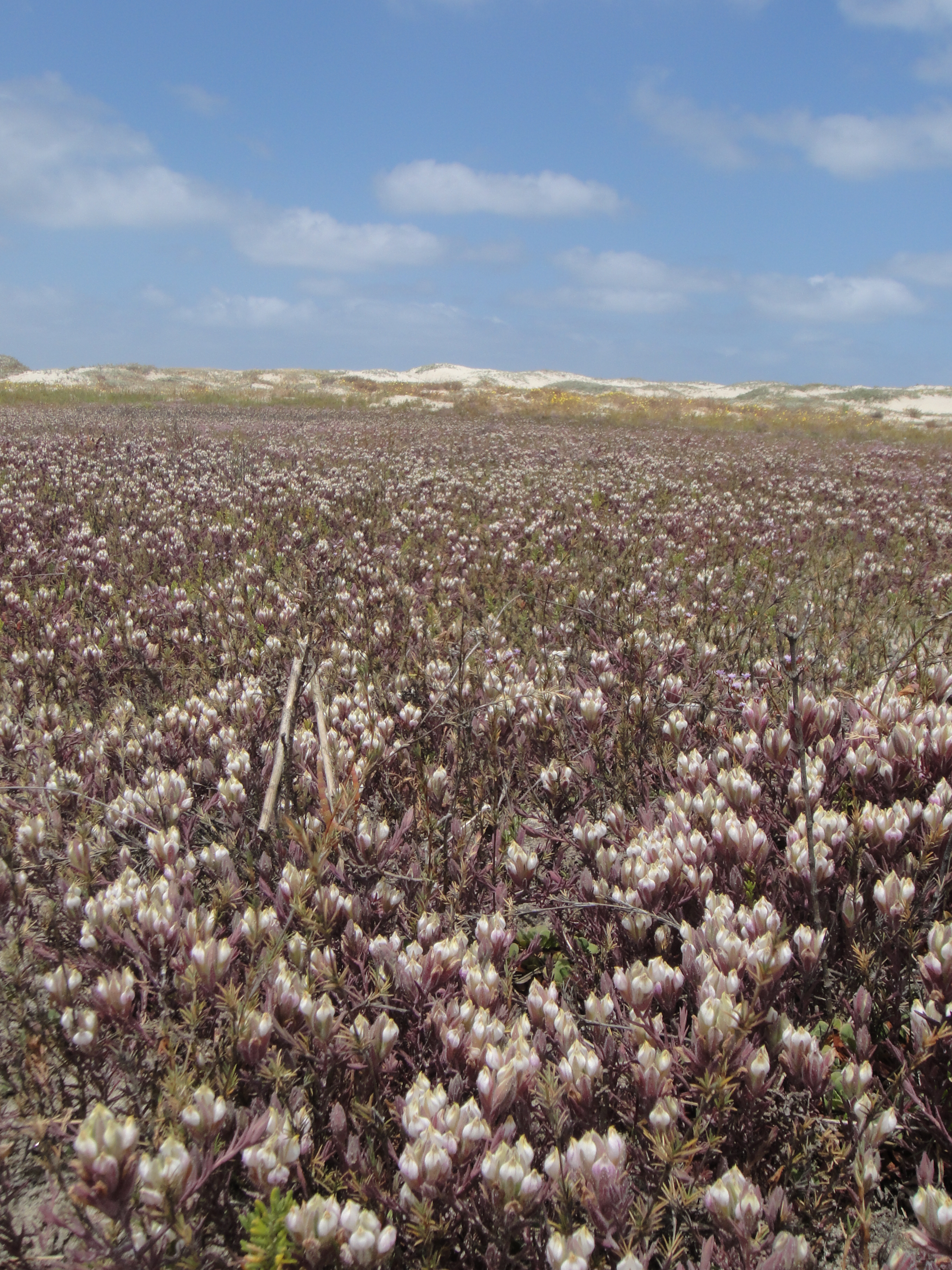 Disjunct coastal salt marshes of southern and central California and adjacent northern Baja California, Mexico [1]. Naturally patchy distributions in sites subject to higher tidal influxes in coastal salt marshes. Considered extant only at Point Mugu in Ventura, County, Tijuana Estuary in San Diego County, and in northern Baja California[2; cited in 1]. Three life history characteristics affect the distribution: (1) annual habit, (2) hemiparasitic mode of nutrition, and (3) the fact that it is a halophyte (a salt tolerant plant) [1]. Within a given marsh, distribution depends upon the local dispersal of its seeds, distribution of potential host plants, and annual environmental conditions.

Halophyte (plant tolerating or thriving in alkaline soils) found in coastal salt marshes generally above most tidal flows [1]. Grows with species of Salicornia, Distichlis, Frankenia, Suaeda, and Atriplex in the higher areas [4]. Generally in areas of low rainfall and high evaporation rates, with little or no summer rainfall and highly seasonal stream flows [5].

Previously Cordylanthus maritimus ssp. maritimus in the Scrophulariaceae family but is now in the Orobanchaceae family [1]. Genetic diversity in natural populations is low [6]. Populations are very susceptible to loss of rare alleles through genetic drift and therefore would be susceptible to the loss of the fitness advantages of heterozygosity.

Hemiparasitic annual plant in the Orobanchaceae (broom rape) family that secures its nutrition from host plant [1].

Each flower may produce 10-40 seeds [7] that can float for up to 50 days [8]. A test of the dispersal pattern of small styrofoam pellets the same weight as the seeds, revealed that tidal flows would indeed deposit the seeds at the upper limits of the debris line and would be coincident with the local distribution [9; cited in 1]. Flowers are self-compatible and are pollinated by various bees including Bombus pennsylvanicus sonorus, Anthidium edwardsii, and Melissodes tepida timberlakei [10; cited in 1].

Over 90 percent of coastal salt marshes and tidal freshwater marshes have been affected by agriculture, the salt pond industry, airports, and urban development [11]. While major habitat loss due to development is now unlikely due to the California Coastal Act and the Federal Clean Water Act, restoration projects (e.g. Batiquitos Lagoon, Bolsa Chica wetlands, and San Dieguito Lagoon at Del Mar) have not focused on maintenance of terrain or hydrological characteristics conducive to the zone of coastal salt marsh to which Chloropyron maritimum ssp. maritimum belongs [1]. Habitat may be threatened from changes in hydrological features of a site, including channelization, water diversion, freshwater inflow, or climate changes. Herbivory by the microlepidopteran, salt marsh snout moth (Lipographis fenestrella) in Tijuana Slough NWR has damaged a few occurrences [12]. Larvae of the moth consumes capsules and even unfertilized ovaries, however, a large number of capsules escape attack. Climate change to warmer and dryer conditions could impact pollinator populations, host plant biology, and interactions with current or new threats [1]. Vehicles, road construction, recreational activities, foot traffic, and non-native plants are additional threats [3].

Relies heavily on ground nesting bees [10; cited in 1] for pollination, making it imperative to preserve adequate nesting grounds [1]. Combinations of life history characteristics and annual environmental conditions may lead to shifts in plant populations or occasional episodes where plants are not present for a time. Likely that if sea level increases, suitable habitat will shift inland and upward in topographic level. Lack of adequate, consistent monitoring, and management likely contributes to the limited success and duration of reintroductions. Additional attempts at reintroduction using up-to-date techniques may be useful. Care must be taken to establish protocols for selection of source populations and permanent records of origin and genetic profile of reintroduced plants. The fact that the highest genetic diversity was found at the two largest populations indicates that care must be taken to insure adequate population sizes to overcome potential negative impacts from genetic drift.