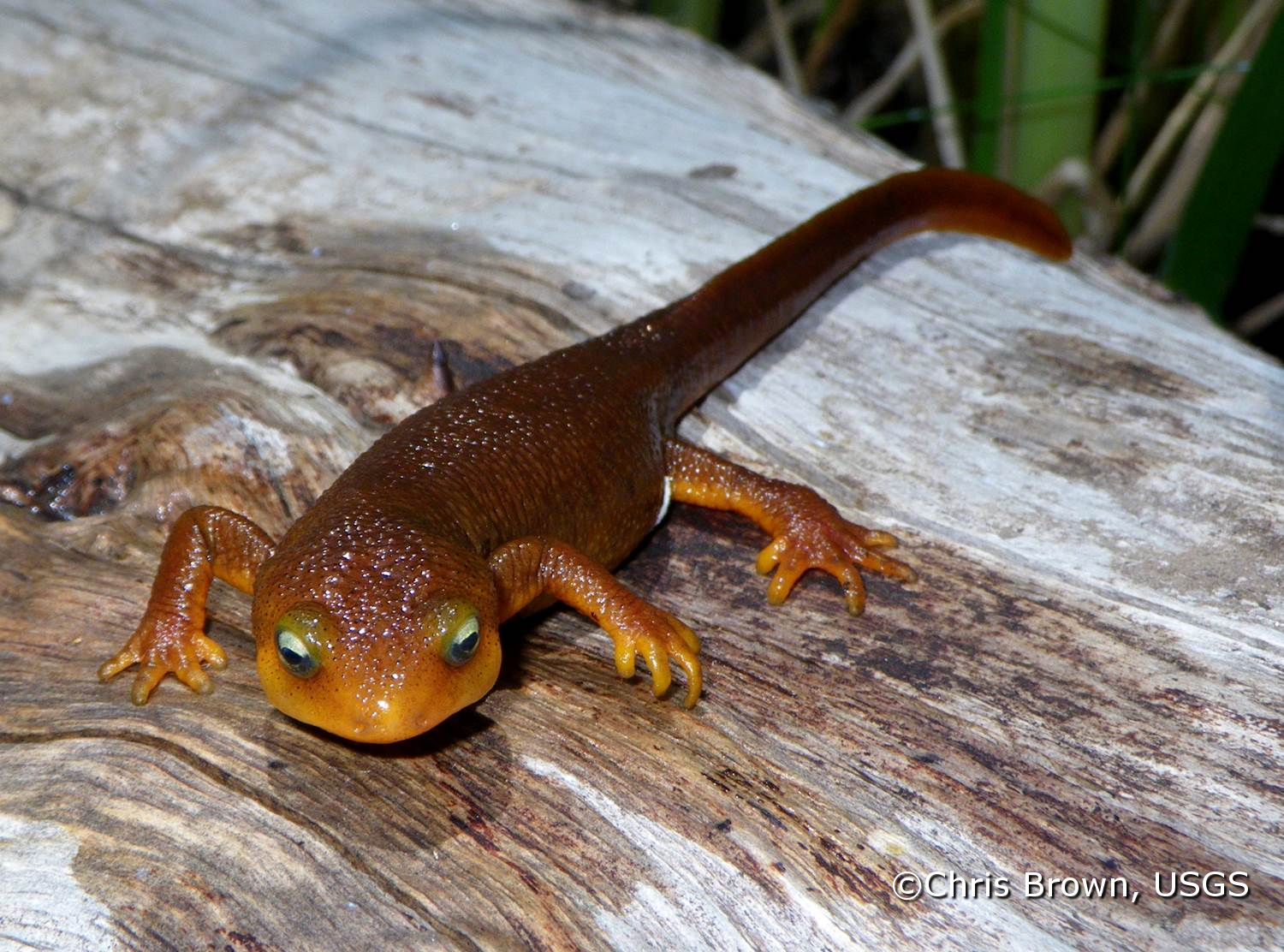 Endemic to California [1]. Distributed along the coast and coast range mountains from central Mendocino County south to San Diego County. Found from sea level to at least 1,280 meters on Mt. Hamilton in Santa Clara County [2]. The sierra newt (Taricha sierra) hybridizes with the coast range newt (T. torosa) in the southern Sierra Nevada [3].

Occurs in MUs 4, 5, and 10 in the MSPA. Localities occur disjunctly south to the Cayumaca Mountains and on the western slope of the Peninsular ranges in San Diego County [4].

Burrow in or use soil, fallen logs, or debris for cover [6]. Central California localities are found in wet forests, oak forests, chaparral, and rolling grasslands. In southern California, drier chaparral, oak woodland, and grasslands are used. Will occupy upland habitats when not breeding [6]. During reproduction, coast range newts will migrate to intermittent streams, rivers, lakes, and ponds where they lay eggs in shallow water attached to submerged rocks or twigs.

Terrestrial and diurnal [7]. Often seen crawling over land in the daytime after rainfall [7]. Little movement occurs during dry periods, especially from late spring to the first rains of the fall season. Inactive during cold temperatures or hot, dry weather. Becomes aquatic when breeding, generally during the months between December to May, depending on environmental conditions. Sometimes seen moving in large numbers to aquatic breeding sites during or after breeding season rains. Breeding adults and aquatic larvae are active both day and night [7, 8].

Reproduction is aquatic [6]. Coast range newts migrate to breeding sites from December to early May, depending on environmental conditions [8]. Egg masses (up to 3.5 cm in diameter) are attached to sticks or vegetation in flowing or nonflowing water. In southern California, egg masses are commonly laid under rocks in quiet stream pools [7, 11, 12]. The average larval stage lasts from March to October [9]. Once metamorphosis is complete, the coastal range newt will migrate upland and not return for about 3 years once sexual maturity has developed. Mating at any one site can last 3-12 weeks. In all situations, males will arrive earlier and remain longer at breeding sites than females [10, 11].

Terrestrial adults and post metamorphic juveniles are known to feed on earthworms, snails, slugs, sowbugs, and a variety of insects [13]. During breeding events, coast range newts may eat eggs of their own species, as well as the eggs of trout, eggs of amphibians, adult and larval aquatic insects, small crustaceans, snails, and clams [14, 15]. Larvae eat small aquatic invertebrates, decomposing organic matter, and possibly other newt larvae.

Coastal range newt’s leave the aquatic habitat within a few weeks of breeding, and aestivate terrestrially during the dry summer months [16]. Ideal habitat is near streams or shallow waters in valley-foothill hardwood and hardwood-conifer habitats.

Threatened from human-caused habitat degradation and loss. Threatened to a much lesser degree by large-scale commercial exploitation [4]. Increased stream sedimentation resulting from erosion caused by human activities and wildlfires has also threatened breeding habitats in some areas [4, 11].Two introduced predators, crayfish (Procambarus clarkii) and mosquitofish (Gambusia affinis), have caused serious declines and eliminated some populations [11, 12]. Many are killed on roads during migration between upland and aquatic breeding sites..

Some verified populations in San Diego County are now extinct [4]. Coast range newt populations south of the Salinas River in Monterey County are considered by the California Department of Fish and Game to be Species of Special Concern [4].